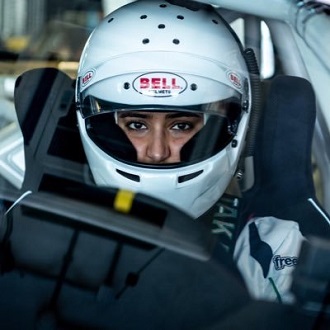 The first Saudi Arabian female racing driver, 27-year-old Reema Juffali, is paving the way for women in a traditionally male-dominated environment and, in so doing, she is also blazing a trail for sporting females around the world.

Up until June 2018, Saudi Arabia had banned women from holding a driving licence. After the law was changed, Juffali became the first woman to be granted a racing licence and, just three months later, made her competitive racing debut at the TRD 86 Cup in Abu Dhabi.

In her first two races, Juffali finished second and third respectively in her category. The points she won were the first ever picked up by a Saudi female driver in that series. Her feats are all the more incredible because of her lack of experience in karting or junior racing.

"I grew up watching F1 and Le Mans [24-hour race] and other races and you realise that most of the drivers start from such a young age and you have to work your way up from so young. I realised it was something I really liked and wanted to do. I thought 'this is something I could definitely try.’"

However, representing Saudi Arabia was never a dream that Juffali thought she could realise.

“It’s something I didn’t really think about until quite late in life, I want to say maybe about three or four years ago that I started thinking about the idea of racing. To be here today is quite unbelievable and to have done it in such a short space of time, I’m very grateful and happy about that. It’s a great honour for me.

“In terms of being from Saudi Arabia, it’s such a great thing for me to do and represent my country and it’s a good time in Saudi to be doing such a thing and all the support I’ve gotten from friends, family, people I don’t even know, has been fantastic and it’s only been pushing me to do better.”

Juffali will make her F4 British Championship debut this weekend, driving for defending champions Double R Racing. She believes that the 10-race event, which begins and ends at Brands Hatch in Kent, is the perfect first step for her in progressing as a driver because of the technical difficulties that each circuit possesses.

“I think this is the most complex set of circuits that we have in the calendar and for me, someone who has no experience, I think it’s a good place to be put on the edge and be thrown out in the deep end,” Juffali said.

"It's going to be a tough year in such a competitive championship, but I'm ready for the challenge.”

For her determination to succeed, her passion for representing Saudi motor racing and for the way she inspires countless other aspiring female athletes in difficult environments, Reema Juffali is JTA Communicator of the Week.