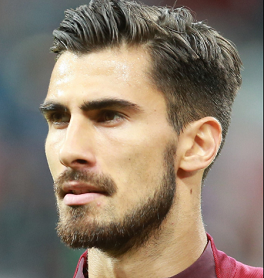 A combination of post-Christmas blues, cold dark nights and the arrival of unpaid credit card bills awards the third Monday of January the gloomy title of “Blue Monday” every year. It is the time where moods are often at their lowest and when many people feel in need of help. However, on-loan Everton midfielder André Gomes was determined to use this gloomy period to spread some much-needed good will across Merseyside whilst at the same time raising funds and awareness for the fight against depression.

On Tuesday 29 January, the 25-year-old held a charity “hug-a-thon” at Goodison Park, where more than 200 “Toffees” queued up for an embrace with the Portuguese star.

Hugs are said to have many psychological benefits that positively impact mental health and overall mood. Coupling that with meeting one of your footballing idols is a sure way to reduce any negative thoughts or emotions.

It was soon forgotten that it was the most depressing time in the calendar as smiles beamed across the faces of hundreds of Blues fans, of all ages, who made a donation to meet the midfielder.

"It is a big honour for me and it was a pleasure to do it,” Gomes said.  “I’m very happy that I could be the first player to do it. For me it is special. I feel a lot of happiness to be here right now. It was special for me to have so many people here waiting for a hug! It was an honour to help people live a better and happier life! For me to have a really small part to help out is a really big honour.”

On the day, Gomes raised over £2,000, helping Everton Football Club pass the £100,000 mark for money accumulated through its various fundraising activities. The money will go towards developing and building The People's Place, a mental health centre close to the club's stadium, which will ultimately help distribute mental health resources to those in vital need.

The silent killer that is mental health should not be ignored and affects many individuals and families across the world. Gomes successfully used his platform as a professional footballer and fan favourite to both directly and indirectly help those suffering.

A 45-year-old Evertonian explained what the event meant to her and her family:

“It is such a brilliant idea. This is quite a difficult time of the year for a lot of people. We have certainly felt the pressure. I also have a lot of family history with mental health issues and these events really do make a difference. The kids loved meeting Gomes. I just want to thank him for taking the time to host such a brilliant event for a worthwhile cause.”

André Gomes is JTA Communicator of the Week for highlighting that little gestures can mean a lot when it comes to reducing depression. His selfless act not only raised money for a vital cause, it also spread a little bit of joy in a simple yet effective way. At the end of the day, something as simple as a hug can make all the difference.