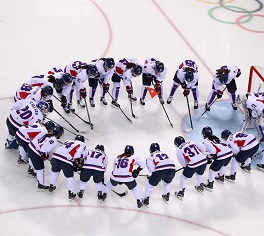 Seldom is history made in sport without a medal being won or a record being broken. At the PyeongChang 2018 Olympic Winter Games, however, the unified Korean women’s ice hockey team exemplified Pierre de Coubertin’s famous maxim: “The important thing in the Olympic Games is not to win but to take part.” Simply by taking part, the team made history.

While an Olympic medal may have eluded the team in PyeongChang, they were winners this week, claiming the "Inspiring Hope Through Sport Award" during the Association of National Olympic Committees (ANOC) Awards in Tokyo. The team members were duly rewarded for not only inspiring hope across the Korean peninsula, but also for highlighting the power that sport holds.

The award was accepted by Park Jong-ah of South Korea and Kim Un Hyang of North Korea on behalf of the team.

Un Hyang was able to reflect on her experiences:

“To be part of the unified Korean ice hockey team in PyeongChang and to walk together under a unified flag at the Opening Ceremony makes me incredibly proud. The collaboration in PyeongChang was an extraordinary sign of peace and a historic moment both inside and outside of sport. It was a true reflection of the Olympic values of excellence, respect and friendship and a clear demonstration of the importance sport has to play in bringing people together.”

North and South Korea were still technically at war when they joined up to compete in the unified ice hockey team for the first time on 4 February. The team faced off against the No. 6 team in the world, Switzerland, and, as expected, got hammered 8-0. They then went on to lose all of their remaining fixtures in their group, but it mattered little what happened on the ice.

To the coach, Sarah Murray, the final results were also beside the point:

“We witnessed North and South Korean players work together in harmony, and I believe this can be connected to the unification process in Korea. We lost, but I think what we need to focus on is the small steps of peace-making and the mutual understanding of each other. We will learn about the differences in cultures, but also we can learn how to improve the relationship.”

The combined athletes created a symbol of good will between two nations that have been divided for over 70 years. Their performances in PyeongChang gave the two countries a reason to talk again. In fact, only hours before the team took to the ice, South Korean President Moon Jae-in received a formal invitation from the North Korea’s leader, Kim Jong Un, to travel across the border for a meeting that would be a first between Korean leaders since 2007.

This unified team has opened the door to many possibilities. There has already been talk of the two Korean countries hosting the 2032 Olympic and Paralympic Games. Who knows what else could happen in the future?

For highlighting that winning isn’t the be all and end all in sport, and for paving the way for peace and hope between two countries that have been at war for decades, the unified Korean women’s ice hockey team is JTA Communicator of the Week.