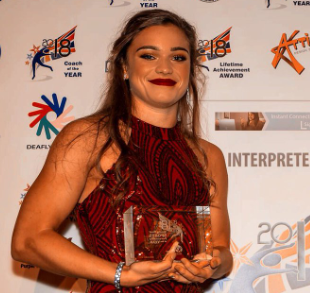 At just 17 years old, Jodie Ounsley might seem like a less usual source of inspiration. However, her moving story combined with her all round sporting ability and grounded demeanour has caught the eye of a global audience.

In fact, it was only this week that Ounsley was deservedly awarded the Young Deaf Sports Personality of the Year in Manchester, United Kingdom on Saturday 17 November.

Ounsley was born prematurely and was diagnosed completely deaf at just four weeks old. However, that didn’t hold her back from achieving her sporting dreams. A British jiu jitsu champion, junior Team GB sprinter and, more recently, a rising rugby star, the 17-year-old's sporting CV is remarkable.

"I like lots of sports, as a kid I was the British champion at Brazilian jiu jitsui - a full contact grappling sport, so I do like a bit of rough and tumble. I think that's why I liked rugby so much. The coal carrying is something I've done since I was very young, I've won that five or six times now. I got into that because my dad used to do it.”

Ounsley only started playing rugby two years ago, but she has already taken the sport by storm. In the last 12 months alone, the teenager from Yorkshire has scored in the County Championship final at Twickenham Stadium, played for England U18 against Wales at the Principality Stadium, signed for Tyrrells Premier 15s side Loughborough Lightning and won the World Deaf Rugby Sevens in Sydney.

Ounsley was duly rewarded for her sporting achievements with the Young Deaf Sports Personality of the Year. However, almost more impressive than her sporting feats throughout the year was her grounded and laid back personality that shone through as she received the prestigious award:

"All the finalists were really successful people in their own sporting fields. I was happy just to be a finalist. When my name was read out my first thought was, 'I hope I don't trip up in these high heels!'. I'm more used to rugby boots and trainers."

While, for many, Jodie's achievements are particularly special, considering the boundaries she has overcome, she doesn't see it that way:

"I don't really consider myself disabled. I've never known any different so I just get on with it. I've been very competitive all my life, whatever I'm doing. I don't think that will change."

Ounsley’s determination, courage and inspirational sporting ability in the face of adversity mean that she will undoubtedly act as a source of inspiration for not only deaf people, but all with an impairment the world over; and so, Jodie Ounsley is JTA Communicator of the Week.