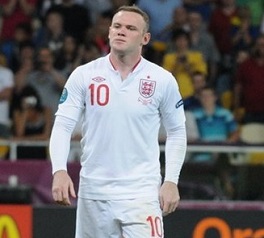 The England national football team bid farewell to one of its longest serving players on Thursday night as Wayne Rooney made his final appearance in a 3-0 win over the USA at Wembley Stadium.

Collecting his 120th cap, Rooney came on in the 58th minute to replace former Manchester United team mate Jesse Lingard and was greeted with a standing ovation from the 68,000-strong crowd.

It was a friendly not only to celebrate Rooney’s illustrious career but also to raise money for the Wayne Rooney Foundation, an organisation that supports the work of charities worldwide, including the NSPCC, Claire House Children’s Hospice, Alder Hey Children’s Hospital and the Manchester United Foundation.

After the match, Rooney tweeted:

“Tonight’s game is dedicated to all the children I’ve met over the years through @FoundationWR. Especially Jasmine who sadly passed away in August. Pleasure to meet her and her lovely family many times at @ClaireHouse, amazing people. Thanks to everyone who’s donated tonight.”

England’s all-time record goal scorer, Rooney has represented his country for over 15 years, and at the end of the match against the USA, delivered a final team talk to the crop of emerging young talent.

“It’s been great the last few days, to see how [the team are] working and improving. Before playing the game I asked Harry Kane to present me with the award because I believe he will beat my goal scoring record and I look forward to presenting him with the trophy. It was a special day for me and my family.”

Rooney has been an inspiration to millions of young players, including those he played with against the USA. Liverpool full-back Trent Alexander-Arnold, Southampton goalkeeper Alex McCarthy and Borussia Dortmund striker Jadon Sancho, who partnered Rooney up front, all paid homage to a former idol.

"Playing with Wayne Rooney was really great – he’s a role model and this was a dream come true for me,” Sancho said after the game. “I told Wayne that I was nervous in the dressing room. He came over and told me to be confident, that I had nothing to lose. I have to say thank you to him because without that advice I might have still been really nervous."

This week’s friendly was not only a final send-off for one of England’s greats but a vision of the team of the future. Rooney’s presence is clear in both, not only representing his country with distinction but guiding and nurturing young players through his role as captain.

For his inspirational leadership over a glittering career and his efforts to raise money for disadvantaged children all over the world, Wayne Rooney is JTA Communicator of the Week.