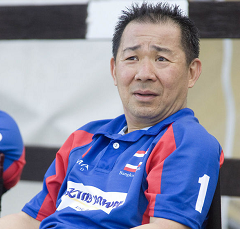 Football fans all over the world are still mourning the loss of Leicester City owner Vichai Srivaddhanaprabha, almost a week after he was tragically killed in a helicopter crash along with four others outside the King Power Stadium.

Footballers past and present, as well as sports stars around the world, have been paying tribute to the late owner. Former Leicester City striker Gary Lineker said Srivaddhanaprabha was not the “archetypal owner”, but one who gave “so much to the club and the city”.

The 60-year-old had been a hugely popular figure since buying the club in 2010, credited for his awareness of the club’s prestigious history and important current-day role within the city. Fans from many other clubs also took to social media to pay their respects.

Vichai Srivaddhanaprabha was an ever-present owner of the club, as he was at most Leicester matches.

Under Vichai Srivaddhanaprabha tenure, the club returned to the Premier League and, in 2016, made history by winning the division for the first time in its history. The team’s incredible run defied odds of 5,000-1, and was hailed as a footballing fairy tale across the globe.

Hundreds of flowers and tributes have been placed outside the King Power Stadium by fans, family and friends.

Leicester City goalkeeper Kasper Schmeichel described himself as “totally devastated and heartbroken”. Upon hearing the news, he tweeted:

“Never have I ever come across a man like you. So hard working, so passionate, so kind and so generous in the extreme. You changed football. Forever! You gave hope to everyone that the impossible was possible. You literally made my dreams come true. We now have a responsibility as a club, as players and fans to honour you.”

“My thoughts are with those family, friends and supporters connected to the tragic crash outside Leicester City’s stadium on Saturday night.

“The outpouring of grief is a testament to how many people’s lives were touched by those on board.”

Leicester City has made the difficult decision to go ahead with its Premier League match against Cardiff City on Saturday. A minute’s silence will be observed before the kick off and players will wear black armbands in honour of those who died alongside Vichai Srivaddhanaprabha.

A giant Thai and Leicester City incorporated flag has been created in memory of Vichai Srivaddhanaprabha, and will be passed to Leicester home fans during their Cardiff City match this weekend, to be surfed along during the game in honour of their late club owner.

Due to Vichai Srivaddhanaprabha’s great leadership and his involvement in Leicester City, he is JTA Communicator of the week.