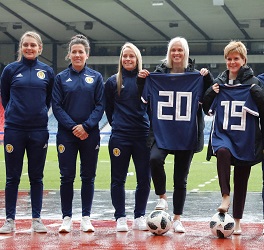 This week saw a major breakthrough for women’s football in Scotland as the national team will now be able to train full-time together ahead of the World Cup, having been granted extra funding by the Scottish Government.

Of the 23 players in the squad that Captain Shelley Kerr named for the final two qualifiers against Switzerland and Albania, 19 are already professional, with 15 in England, two in Sweden, one in Italy and one in the United States.

The non-professional players in the team have been juggling work or study full-time/part-time whilst training with their clubs four or five times a week, on top of a strength and conditioning programme.

Glasgow city midfielder, Jo Love, commented: "The manner the Scottish players train is nothing short of professional, it's really just the time to dedicate 100% every time we're there. The idea is we can promote women's sport, women's football and raise the level of the game and get closer to the set-up England have got."

Love has communicated the importance of equality within football, not just male and female, but also between England and Scotland teams.

After qualifying for the World Cup earlier this year, the team decided they needed to help their non-professional team mates by campaigning to receive a grant so they could also train full-time.

The Scottish Government has pledged around £80,000 extra cash, meaning Shelley Kerr’s whole squad will be training full-time from January until the tournament in June.

“This is great news for everyone in Scottish women’s football. On the back of such a monumental achievement in qualifying for the World Cup, the positivity around the women’s national team has been amazing,” Kerr said.

“Throughout the campaign, the team has built resilience, they have character in abundance and they play exciting football. It comes down to the product as well and we have aimed to entertain from the start.”

The team have effectively communicated to the public how they want to increase participation of women and girls in sport, with the success of the women’s team inspiring more women and girls to get involved.

First Minister of Scotland Nicola Sturgeon confirmed the funding at Hampden Park in Glasgow. She said, “I’m proud to be a patron of the Scotland women’s national team and it’s been fantastic to see the hard work of the squad and staff pay off with their qualification for the FIFA World Cup next year.”

For the players using their funding to promote the participation of women’s football, the Scotland Women’s National Football Team are this week’s JTA Communicator of the Week.