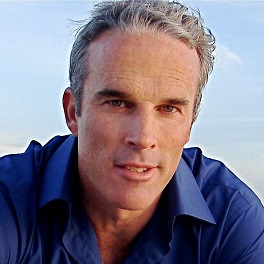 Lewis Pugh, a British-South African endurance swimmer from Plymouth, completed his 530km swim across the English Channel this week in support of cleaning up the oceans and has urged the Government to better protect the UK waters, stating that “our oceans are in crisis”.

During his 49 gruelling days of swimming the entire length of the English Channel (and so becoming the first to do so), Pugh encountered an alarming amount of discarded plastic. However, there was one thing he hardly ever saw: wildlife. Through Lewis’ dedication to the sport and wildlife conservation, he has used his heroic endeavour to communicate the importance of protecting the world’s seas.

The 48-year-old has said that the UK Government needs to have a “very long hard look at its fishing policy and to review it,” as there is “nothing left”. Before he set off, he had warned that just seven square kilometres of the UK’s coastal waters were fully protected.

Starting at Lands’ End, Pugh beat his 50-day target and arrived in Dover a day early, describing his challenge as the “Everest of swims”. He was welcomed by Environment Secretary Michael Gove, who called him a “modern-day hero” and “a brilliant champion for marine conservation zones”.

When Pugh arrived on Shakespeare Beach, his Twitter was updated with:

The tweet has seen over 14,000 interactions and his swim has now been observed and verified by the Channel Swimming Association.

Pugh has expressed his concerns that he had seen plenty of jellyfish, one turtle, a few dolphins and next to no birds. Tweeting throughout his journey before he outdid his 50-day target, he said:

“50 days of swimming in the English Channel, and the most surprising thing is what I have not seen. Why are more people not talking about this?”

His campaign, the Long Swim, which Pugh states to be his “toughest” swim yet, aimed to emphasise the amount of plastic waste entering the seas and raise awareness of the threat to British waters from overfishing, plastic and climate change. Through his campaign, Pugh has communicated his message throughout the sporting industry and the general public.

The environmental campaigner and UN Patron of the Oceans took part in beach clean ups along his journey, which were organised by marine conservation charity Surfers against Sewage, further promoting the need for both the Government and the general public to take action.

For his strong stance towards protecting our oceans and his bold approach to combatting the dangers of plastic, Lewis Pugh is JTA Communicator of the Week.