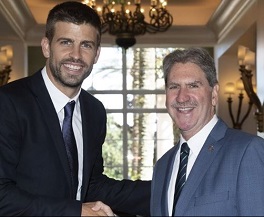 The International Tennis Federation (ITF) made a huge step to securing the future of tennis this week when over 71% of National Associations voted in favour of historic reforms to the Davis Cup at the ITF Annual General Meeting in Orlando.

The much-needed reforms, spearheaded by International Tennis Federation (ITF) President David Haggerty, in partnership with Gerard Pique’s Kosmos investment group, will provide new revenues for nations that will enable greater development of the sport all over the world. The 25-year, $3 billion deal with Kosmos will also create an annual player prize fund of $20 million and see operational investment that will elevate the Davis Cup to the Grand Slam level.

Haggerty’s communication of the transformative impact the reforms will have was key to securing the two-thirds majority the ITF needed. Under the new format, 18 nations will battle to be crowned world champion in a year-end, week-long World Cup-style Davis Cup Finals event in a neutral location, starting next year.

Speaking after the announcement, Haggerty said: “This new event will create a true festival of tennis and entertainment which will be more attractive to players, to fans, to sponsors and to broadcasters.”

Not only will Haggerty’s reforms shake up an ageing competition structure and help ensure the participation of tennis’ best players, it will also mean that the tennis world will be financially secure for many years to come and independent from professional circuits like the ATP.

With many nations struggling for money to invest into tennis, it was vital that Haggerty clearly communicated that the reforms would help change the landscape of global tennis development:

“The ITF is the only organisation that puts money into the development of the game. And that’s what this project enables us to do. The money that we make will be put back to the nations for their development programmes and the future of tennis. The new revenues for nations that the event will generate will have a transformative effect on the development of tennis in all nations. Our mission is to ensure that this historic decision will benefit the next generation of players for decades to come.”

Gerard Pique, a lifelong tennis fan, echoed the excitement for the new reforms that his $3 billion investment has enabled:

“This is the beginning of a new stage that guarantees the pre-eminent and legitimate place that the Davis Cup should have as a competition for national teams while adapting to the demands of this professional sport at the highest level.”

The Davis Cup is a competition with a long and very proud history, but without doubt it was a competition in need of freshening up. Haggerty’s commitment to innovation and his ability to communicate clearly and effectively has set the benchmark for other sports leaders around the world. And for that David Haggerty is JTA Communicator of the Week.