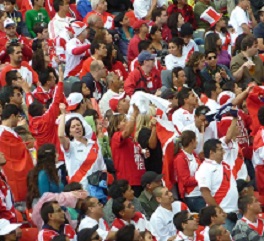 With the group stages of the 2018 FIFA World Cup Russia over, there has been no shortage of excitement and controversy. Fans have travelled to Russia in their tens of thousands and are well aware that they have been part of something very special; shock exits, goals in abundance and some outstanding football in a World Cup that has already been lauded as one of the best in recent memory.

Fans have made a huge contribution to this success and none more so than the fans of Peru who have been waiting 36 years for this moment.

Last November, when Peru qualified for the World Cup for the first time since 1982, President Pedro Kuczynski declared a national holiday. Travel agencies in Peru and FIFA’s ticketing website were inundated as people frantically tried to book their trips to Russia.

Over 43,000 tickets were sold to Peruvians in the first FIFA ticket ballot, which was the eighth highest figure of any country at this 32-team World Cup. But it is estimated that nearly double that actually travelled to Russia.

No obstacle was too big, or journey too long, for these sport-loving fans who went to extreme lengths to support their country. Some gave up their jobs, sold their cars or borrowed money from banks to afford tickets. Some travelled for up to two months across land, air and sea just to get a glimpse of their national team. One 24-year-old man even intentionally gained 25kg in weight so that he could qualify for an easy-access extra-width seat, which it is claimed are easier to get tickets for.

“Every World Cup that we haven’t qualified for we have suffered, because we are very passionate about football. That’s why now, after 36 years, we are crazy about it. I sold my car to be here. I had a Mustang GT and I got rid of it because this is a once-in-a-lifetime experience,” said Angel Carranea, a fan from Lima.

They have been voted as the ‘breakout fans of the World Cup’ for their joviality, passion and excitement. It has been impossible to resist their colour, warmth and humour even in the face of adversity and spectators at next year’s Pan American Games in Lima will surely be looking forward to more of the same.

While their national team were not able to progress beyond the group stages, there is no doubt that the Peru fans have captured the imagination of people all around the world.

Neil Custis of British newspaper ‘The Sun’ tweeted that the Peruvian fans should be rewarded for their behaviour in Russia:

@FIFAWorldCup please give the Peru fans an award. They were incredible in Sochi yesterday with a team already eliminated. Their singing of 'Contigo Peru' at the final whistle is still giving me goose bumps.

For lighting up the Russia 2018 World Cup with their overwhelming noise, passion and commitment and for once again highlighting the importance of sport in the lives of many, the Peru fans are JTA Communicator of the Week.