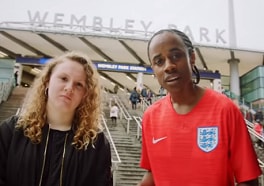 As the end of the domestic season draws to a close, the build up to the 2018 FIFA World Cup in Russia begins to gain traction with football fans across the world. One of the most anticipated moments in the lead up to the tournament itself is the squad announcement, where fans speculate which stars will represent their nation on the sport’s biggest international stage.

As the media gathered for the traditional squad announcement by The Football Association “suits”, many were taken by surprise when The FA unveiled its unorthodox approach. Instead of the standard press conference, announcing the 23 English players who are on their way to Russia, The FA released a short video featuring young people from all over the country reading out their idols’ names in different and creative ways.

The YouTube video, which went viral on social media on Wednesday, begins at Wembley Stadium, the English “home of football”. It then takes the viewer on a journey across England, where each player selected is introduced by young fans from different races, genders and abilities from the area they grew up in.

Shots of young people playing football, hanging out with friends or on public transport make the video relatable to its target audience. The regional accents demonstrated throughout is symbolic of the diverse and varied make-up of the England squad.

Throughout the video, there are relevant popular culture references; from kids playing FIFA to using social media, each announcement has its own personality. The passion of the fans is the primary message being communicated as The FA looks to build excitement for the biggest single-sport event in the world.

The video was created by Wieden+Kennedy, who also produced Nike’s Nothing Beats a Londoner advert, a star-studded snapshot of the varying struggles that Londoners go through each day.

However, the video hasn’t been wholly popular, particularly with the older demographic. The FA has come under criticism for focussing its digital strategy too heavily on the under-17s and neglecting the rest of the fan base.

One thing is for sure: the video has had everyone talking about the England squad, the FIFA World Cup in Russia, and the squad’s chances come 14 June. For its unique approach and active engagement, The FA is JTA Communicator of the Week.