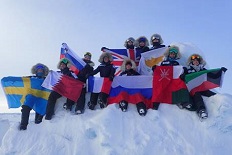 This week, the world was able to witness a truly inspirational and refreshing story as 11 brave and determined women from a mix of nationalities and backgrounds completed a gruelling ski expedition to the “top of the world”.

On 15 April, the team flew from the Arctic Norwegian archipelago of Svalbard to the floating ice station known as “Barneo”, and started their ski journey across the Arctic pack ice to the Geographic North Pole. The team, representing 10 different countries (UK, France, Sweden, Qatar, Oman, Saudi Arabia, Russia, Cyprus, Kuwait and Slovenia), took just eight days to ski the “last degree” over 80km of treacherous terrain.

Many of the women also achieved a feat that no other person from their respective country has accomplished before - an achievement made even more impressive when learning that most of the expedition party were first-time polar adventurers. The Arctic, considered the largest desert in the world, poses extremely dangerous challenges to even the most expert of explorers. Each member of the team had to endure freezing temperatures and navigate open leads of water in the sea ice, whilst also maintaining vigilance from the constant threat of polar bears.

As well as completing a once-in-a-lifetime personal quest, the all-female team gained a greater understanding of each other’s Western and Arabian cultures. The expedition transcended the current political climate and became a global example of sport paving the way for positive communication.

Felicity Aston, MBE, expedition leader and experienced polar guide, explained that cultural differences should be celebrated and welcomed rather than feared or ridiculed:

“The world is facing global problems – such as climate change – that can only be tackled with global solutions. We want to send a strong and positive message about gender equality and the need for greater cultural understanding when tackling large problems.”

The expedition was sponsored by global cybersecurity company, Kaspersky Lab, and its CEO, Eugene Kaspersky, added his thoughts about the inspirational team of women:

“For me, Arctic adventuring isn’t just an exciting challenge, it’s a powerful motivation. People like Felicity and her team – determined and passionate – genuinely inspire me. They’re also role models for the younger generation – they help them to really go after what they want in life.”

For their determination and bravery, for acting as a source of inspiration to women worldwide, and for proving that people from different backgrounds and cultures can work together for the greater good, the women of the Euro-Arabian North Pole Expedition 2018 are JTA Communicator of the Week.