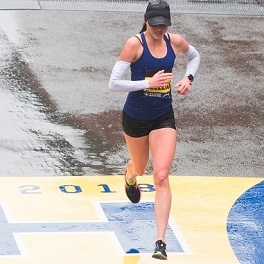 Professional sports stars are idolised worldwide for their dedication and commitment to their sports. Amateur sports stars or fans often look to their heroes for inspiration to achieve their lifelong sporting goals, but many think that this is unrealistic because “their moment has passed” or they are “too busy”. However, these excuses were proved obsolete on Monday.

Sarah Sellers, a 26-year-old full-time nurse, came second in the 122nd edition of the Boston Marathon against 30,000 other runners. The marathon was contested by a number of professional runners, many of whom have done countless marathons and trained their whole lives for these events. This didn’t faze Sellers though. To put her achievement into perspective, Sellers finished just minutes behind the winner - two-time Olympian, Desiree Linden.

Sellers has always enjoyed running (especially track and field), but previous injuries stopped her from competing at an early age. Nevertheless, years after thinking she had given up competitive sport for good, Sellers ran the 26.2-mile course in 2 hours 44 minutes 4 seconds in what was only the second marathon she had ever run. She ran the race without sponsors or an agent, and only signed up in the first place because her younger brother was participating.

"Looking at the field of athletes assembled yesterday, I would have been ecstatic to finish in the top 15," she told the BBC.

On a typical day in the run up to the marathon, Sellers would wake up at 04:00 to squeeze in a couple of hours training before starting her long anaesthesiology shifts at 06.30 at Banner Health Centre in Arizona. She would also often train again after work in what must have been a gruelling daily routine for her. Nonetheless, Sellers was justly rewarded for all the hard work she put in, even though she must have had no idea that she would be taking home the silver medal and a whopping $75,000 in prize money.

Sellers stated that she would like to continue to compete and, even though she laughed off media questions about turning professional, who knows what she could achieve!

"I'm definitely going to compete again. Before the race, I'd not thought what was going to happen beyond it. But I’m going to continue racing, I love it!"

Sellers proved that it is never too late to achieve your sporting goals and that a full-time job shouldn’t be used as an excuse. She demonstrated convincingly that dedication, commitment and hard work are all you need to realise a dream; her story will inspire other amateur athletes and sporting fans to make time for the sport they love.

For her highly positive attitude and values, and because she is a realistic role model for many amateur athletes and sporting fans worldwide, Sarah Sellers is JTA Communicator of the week. Congratulations, Sarah!