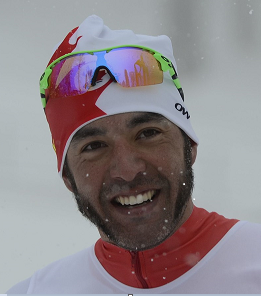 In a week where the world bid farewell to rare genius Stephen Hawking, a man who inspired so many people in the face of adversity, it is perhaps apt that we are currently drawing similar inspiration from the incredible performances of the PyeongChang 2018 Paralympians.

One of these athletes is Canadian cross-country skier and record-breaker Brian McKeever. McKeever suffers from Stargardt disease, an inherited condition of macular degeneration, which has robbed him of his central vision.

Nonetheless, McKeever has enjoyed a long and extremely successful career in cross-country skiing. The tip of the iceberg came this week when he became Canada’s most decorated Paralympian ever by winning gold in the 20km as well as the 1.5km sprint: his 14th and 15th Paralympic medals overall.

McKeever now has a shot at completing a "triple treble" with a gold in the men's 10km event on Saturday 17 March; he won gold in all three individual men's races - sprint, 10km and 20km - at both the Vancouver 2010 and Sochi 2014 Winter Games and is two-thirds of the way there in PyeongChang.

McKeevers’ attitude towards his disability is refreshing and inspirational for many people with an impairment around the world:

“So what? In the end, I can’t drive. If that’s the worst of it, no big deal. There are 30 million people in Tokyo, how many of them are driving? They’re all taking the subway to get to work. Everybody has something that makes us insecure and shapes our perspective of the world that we live in. We can see it as a physical disability, we can see it as an emotional disability, and we can see it as psychological. All that stuff is there. Or we can choose to not see it at all.”

McKeever is just one of many Paralympians who inspire on so many levels. Since Sochi 2014, the participation in winter sports of people with an impairment has more than doubled globally. The captivating performances of Paralympians at PyeongChang 2018 are only likely to further increase participation rates.

Paralympians have helped audiences understand that people with a disability should not be restricted by their own impairments or by the barriers put on them by society. Paralympians are role models and heroes who have overcome adversity and ultimately helped change societal perceptions of people with an impairment.

For his record-breaking achievements at the PyeongChang 2018 Paralympic Games this week and for acting as an inspiration for so many people with an impairment, Brian McKeever is JTA Communicator of the Week. Congratulations Brian and good luck in the 10km!