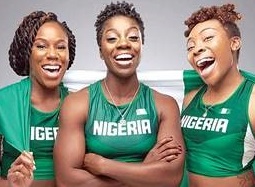 The Nigerian team of Seun Adigun, Ngozi Onwumere and Akuoma Omeoga made history on Tuesday, becoming the first women to represent an African country in bobsleigh. Though they finished last in qualifying, it is the journey and, perhaps more importantly, the legacy that follows that will define Nigeria’s success, not the medal table.

From training in the USA, to Canada and then to PyeongChang, it has been an accelerated education for the team, who all began their careers as track athletes but have been training together for bobsleigh since 2016.

“I don’t think it’s hit us how impactful this whole process will be in the long run,” driver Adigun said after the race. “You don’t have to quantify things by just the result of first place or any time. You can actually quantify it by your ability to be selfless, your ability to drive and your ability to be innovative. This was just meant to be.”

“The Olympic experience is really unique, it’s an experience you can’t really articulate,” added brakeman Omeoga. “Nigerians are incredibly proud and I think one of our goals was to present Nigeria in a positive light. It gives people a reason to celebrate something.”

There are obvious parallels between the Nigerian women’s performance and the Jamaican men’s bobsleigh four-man team, who competed at Calgary 1988 and were immortalised in the film “Cool Runnings”. Omeoga has been flattered by the comparisons and instead of playing down the pressure of emulating the cult heroes, hopes that Nigeria’s participation in PyeongChang will inspire a new wave of African athletes.

“That’s the legacy that we hope to have in 30 years to come,” she said. “If you see our faces and we inspire you to do something, then that’s absolutely all we ask for.”

The PyeongChang 2018 Olympic Winter Games have provided a platform for athletes and nations to show that sport can have a defining effect on society. The 2018 Jamaican women’s bobsleigh team, who finished just one place ahead of Nigeria, became the first female Winter Olympians from the Caribbean island, and American-born Elizabeth Swaney competed in the skiing halfpipe for Hungary, finishing in last place but encouraging the next generation of athletes to follow their dreams.

Often in sport the focus is solely on the podium, but achievement can also be measured by the extraordinary feats throughout the journey. No African nation has ever won a medal at the Olympic Winter Games, but by creating role models, investment and perseverance, it may be Beijing 2022 where we see the first.