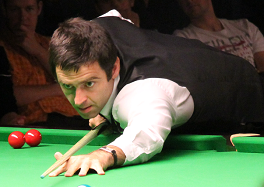 This week, Ronnie O’Sullivan won his sixth UK Championship title, equalling Steve Davis for the most in the history of snooker. A commanding 10-5 victory over Shaun Murphy was also his 18th “Triple-Crown” success, tying the current record set by Stephen Hendry.

Throughout his 25-year career on the baize, O’Sullivan has polarised fans with his individual approach to the game. From playing in socks at the 2015 World Championship to letting a fan take a shot at this year’s UK Open, O’Sullivan has never been one for following tradition. On more than one occasion, he has been at odds with World Snooker and has repeatedly talked of retirement. In 2010, he refused to pot the final black and complete a maximum 147 break because there wasn’t a bonus prize on offer.

However, while some snooker fans may oppose his rebellious style of play, there can be no question of O’Sullivan’s immense quality.

“He was as close to perfection on the snooker table as you are likely to see,” John Parrot said after his UK Championship win on Sunday. “Shaun Murphy ran into a genius of a juggernaut tonight.”

Though he makes the sport look easy, sustaining success is a different challenge and O’Sullivan has had to deal with internal struggles throughout his journey as a professional. He is very open about his ongoing battle with depression and works closely with a sport psychologist to help overcome mood swings.

O’Sullivan says he finds solace in sport; away from the snooker table it is motor racing, football and -  most importantly - running that keep his head clear.

“Running is what has helped me to fight my demons,” he said. “Win five world snooker championships and cope with all the crap that life has thrown at me. My running trainers are the most important things I own.

“To find running - and to find that community spirit that I got from running - fitted into my true values and beliefs in life. It’s been a good addiction for me in a sort of way."

Next month, O’Sullivan will attempt to defend his 2017 Masters title and, in the process, add another win to the record seven he already owns. Victory for “the Rocket” would move O’Sullivan ahead of Hendry, in terms of major titles, to a tier above all others.

There is no other player in snooker’s history who has been more influential than the 42-year-old. Universally labelled a genius by his peers and fans alike, the only person who can stand in his way is O’Sullivan himself.