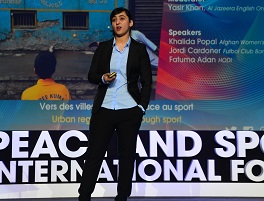 On the final day of the 2017 Peace and Sport International Forum in Monaco, Khalida Popal was named Champion of the Year, in recognition of her lifelong commitment to promoting women’s rights in Afghanistan.

Encouraged to play sport by her mother, Popal fell in love with football and practised wherever and whenever she could, despite heavy pressure from within the former Taliban-ruled nation. In 2007, aged 19, Popal was named the first captain of the Afghanistan women’s national team, leading her side to a 5-0 victory over an International Security Assistance Forces team. However, the result was secondary for Popal.

"We played in Ghazi Stadium in Kabul, where women had been shot,” she said in an interview with the BBC. “I remember thinking that it was a huge change because before, women were shot in that penalty area and now I was kicking a football there.

"It was emotional, but I was feeling the power, the power to change something, I was fighting for those women who were killed and not to have to go back to that situation.”

In 2010, the team played their first recognised international fixture, but facing intimidation and even death threats, it soon became clear to Popal that she was not safe in Afghanistan. Fleeing to India without a visa, Popal still managed to arrange a match for her country and continued to fight for the rights of women in the Middle East.

Popal secured asylum in Denmark and, despite a knee injury ending her on-field career, has continued to passionately fight for women’s rights and the wellbeing of refugees.

“It doesn't matter where I end up or where I am in the world. I will continue to participate and co-ordinate the programmes and help my country from far away. That is the thing that has kept me alive and happy and it motivates me to work hard because I love my country," she said.

Popal’s CV continues to grow. In 2014, she founded Girl Power, an organisation that aims to empower minority groups and raise awareness of gender issues through sport. She is Programme and Event Director of the Afghanistan Women's National Football Team and an ambassador for Street Child World Cup, and has forged a path for other girls and women who want to follow her route into sport.

For her courage, determination and unwavering commitment to the growth of female sport in Afghanistan and throughout the world, Khalida Popal is JTA Communicator of the Week.