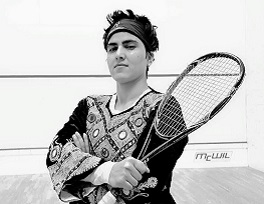 This week at the 2017 SPORTEL Awards, a documentary depicting a young girl’s battle to take part in sport in the Taliban-oppressed town of Waziristan, Pakistan, was awarded the 2017 Peace and Sport Documentary Prize.

“The girl unbound: the war to be her” tells the story of Maria Toorpakai, who was encouraged to be active by her father despite numerous threats against her and her family. In tribal areas such as Waziristan, girls are not allowed to play outside or even go to school, but Toorpakai was empowered by her parents’ conviction that she should have the same opportunities as the boys in her region.

“This journey that I'm taking further today started with my father,” Toorpakai said in an interview last year. “He was the first one who stepped up against all this cruelty against girls, against women. He argued with the jirga, the elders, about what we can do better for our people, especially women and girls.”

With her hair cut short and having burned all her dresses, Toorpakai took up weightlifting and, aged 12, was victorious in an all-male national competition. Her attention soon turned to squash, where she was forced to announce her gender after a male birth certificate was required to compete.

Toorpakai was shunned, bullied and harassed by many at her own club, and forced to play without a coach or training partners. She received death threats from the Taliban and even endured three years of self-induced isolation to avoid the attacks that had become part of her daily routine. But in 2006, Toorpakai turned professional and moved to Canada to train under the tutelage of former world No. 1 squash player, Jonathon Power.

In 2009, Toorpakai won third place in the World Junior Squash Championships and three years later won her first professional ranking event. Throughout her career she has been a regular in the world’s top 100, reaching a high of No. 41 at the end of 2012.

This story transcends the boundaries of sport and is a champions’ tale for women’s rights, social injustice and freedom from terror. Under intense pressure to conform, Toorpakai and her entire family stood firm in direct defiance of the oppression they faced.

In August 2007, the President of Pakistan, Pervez Musharraf, presented Toorpakai with the Salaam Pakistan Youth Award for her outstanding contribution to sport, and in October 2012 she won the first annual Voice of Hope Award from former Canadian First Lady, Laureen Harper.

Alongside her sister Aisha Gulalai, a Pakistani politician working to empower women in tribal areas, Toorpakai continues to campaign for the rights of women and young girls in Pakistan and throughout the world.

“I went back to one of the tribal regions - I just couldn't believe all those girls - I had seen them years ago in my mother's school, or when they came to our house. They were such beautiful young girls, delicate, you know,” Toorpakai said.

“But when I saw them, they were the same age as I am. And they have so many children. And their faces are wrinkled, and they look, like, 50 years old. You can see how their life has been. It's just unbelievable. They could be squash players. They could be like me. They were so talented. They could be doctors. They could be engineers - anything like that, but they were just wasted, so many girls.

“I feel that this is my responsibility, I have to raise my voice for the other girls. I have to give them the same opportunity so that they become champions too.”

For her bravery, dedication and trailblazing in the name of women’s sport, Maria Toorpakai is JTA Communicator of the Week.