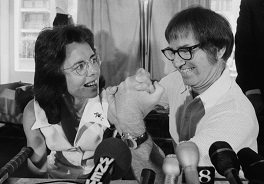 In an illustrious career, Billie Jean King won 39 Grand Slam titles across singles, doubles and mixed doubles disciplines, becoming a household name as she raised the profile of women’s tennis around the world. This week, Battle of the Sexes made its European premiere at the British Film Institute’s (BFI) London Film Festival, documenting a defining moment of King’s career and a match that changed the course of women’s sport forever.

Despite her numerous achievements on the court, it was her role off it that immortalised her as a pioneer, advocate and role model for sportswomen everywhere. As an active campaigner for equality in tennis, King pushed for greater parity from an early age. In 1973, she threatened to boycott the 1973 US Open unless the prize money was standardised for both genders. In the same year, King formed the Women’s Tennis Association (WTA), heralding a new era for the representation of sportswomen.

But it was the subject of this latest film that was to be one of King’s most high profile battles. Former Wimbledon champion Bobby Riggs, an overt chauvinist, had developed a reputation for chastising female players, which gave him a notoriety that did not just resonate in tennis circles, but throughout the sporting world.

“Billie Jean King is one of the all-time greats. She’s a superstar. She’s ready for the big one,” Riggs said. “But she doesn’t stand a chance against me. Women’s tennis is so far beneath men’s tennis.

“I want to prove that women are lousy, they stink and they don’t belong on the same court as a man.”

A five-set, $100,000 match was scheduled for 20 September 1973 between an in-form King and 55- year-old Riggs. Just four months previously, Riggs had beaten the reigning women’s number one, Margaret Court, 6-2 6-1, and King felt obligated to set the record straight.

“I thought with Margaret losing, it would be a good chance for some of the people to start jumping on the bandwagon to hurt our tour, to hurt women’s sports, the women’s movement,” King said. “As soon as I found out [the result], I knew I definitely was going to play Bobby Riggs. I did not have a choice.”

Over 30,000 people packed into the Houston Astrodome to watch the match, dubbed Battle of the Sexes by ABC, which gave the event prime-time billing. King came out on top, winning in straight sets, 6–4, 6–3, 6–3. Despite the comprehensive victory, it was what the result stood for that mattered for King.

“Riggs was as old as my father. For me to beat him meant absolutely nothing athletically. Nothing. But it’s what it represented. When Margaret lost, I didn’t know if I was going to beat him. I thought she would kill him as far as winning, and she didn’t. … You never underestimate your opponent.

“Had I lost, women’s tennis would have suffered and the women’s movement would have been damaged,” King said, when speaking to The Guardian on the 40th anniversary of the match. “I knew it was very important I win the match if I wanted people to take women’s tennis – and women – seriously.”

In 1975, Sports Illustrated stated that it was likely King would “go down in history as the most significant athlete of this century". Her campaign for equality did not end with Riggs, and in 1974 King went on to co-found World TeamTennis, a mixed gender tennis league. In 2014, the Billie Jean King Foundation was established, which aimed to address inclusion and diversity in the work place.

Emma Stone plays King in the biopic and, ahead of the film’s release, she called the role “empowering”. Stone is not the first to have felt empowered by King’s strength of character and determination to change the status quo, and she certainly won’t be the last.