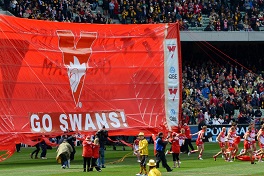 Sport can often be portrayed as divisive when fans choose sides and rivalries grow, but it is also a powerful tool that unites countries, cultures and friends all over the world. Sport gives people a passion and a purpose, and can inspire wonderful moments that are now shared globally.

Mark Smith, an avid 12 year-old Aussie rules fan, has supported the Sydney Swans since he was able to stand, run and re-enact his favourite moments in the back garden. With his friend, Jarryd Haines, the two began going to games live at the Sydney Cricket Ground and fell in love with the atmosphere that came with supporting their team.

However, when Mark was nine, he was diagnosed with cancer of the brain and spine, which affected his vision, impaired his hearing and restricted his movement. This meant being able to emulate his heroes became a thing of the past. The Swans remained an important outlet for Mark and he would listen to the commentary throughout his treatment, and attend games when he left the hospital.

Using the streamed commentary to help him follow live matches, Mark took his seat alongside Jarryd for the Swans’ last home game of the season, against the Carlton Blues. With the home side in the lead, the commentary stream Mark was using faltered. But instead of simply giving his friend the occasional update and concentrating on the game himself, Jarryd launched into a full play-by-play commentary of the action, with all the excitement and background knowledge of a professional.

Through his friend, Mark’s remained connected to the Swans as he continued to enjoy the performance, whilst on the pitch Lance “Buddy” Franklin led his side to a rousing 138-57 win.

“OK. Buddy’s got it. He’s quite far out. Will he go for it? He’s going for it. It’s good and it’s his tenth goal! Buddy is on fire,” Jarryd exclaimed.

Jarryd’s selfless action was picked up by journalist, Jonathan Drennan, who tweeted about what he had witnessed. The club saw the message and reached out to their fan base, to help locate the two young supporters.

After tracking down the boys, the Swans put on a VIP experience where both Mark and Jarryd were able to meet the players and have a tour of the stadium. They also got to carry out the team’s banner before the Elimination Final against Essendon last Saturday.

“It just shows you the power of social media, and the power of the (Aussie rules) football community,” Drennan said. “Everybody has got behind this story and it’s so pleasing to see the club were able to find the boys.”

After the story reached the newspapers, similar tales began to circulate, originating from all over the world to show sport in its finest light. While Jarryd was simply helping his friend enjoy the game, his actions have been shared and may have positive repercussions he will never know.

For his friendship, initiative, and true passion for sport, JTA’s Communicator of the Week is Jarryd Haines.