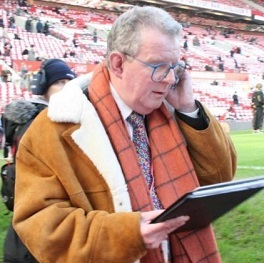 Beloved football commentator John Motson has been the comforting voice of English football for the past 50 years, guiding fans faultlessly through 10 World Cups, 29 FA Cup finals and over 200 England matches.

“Motty”, who has provided fans with countless memories throughout his unparalleled career, announced this week that, at the end of the season, he is going to hang up his BBC broadcasting boots once and for all.

Motson’s announcement led to widespread tributes from former players, managers, fans and fellow broadcasting colleagues, all united in the opinion that he is a once-in-a-lifetime communicator who changed the face of sports broadcasting.

The 72-year-old’s career took off when the BBC hired him in 1968 as a sports presenter on Radio 2. Three years later, he was given a role on the football highlights programme Match of the Day, becoming a regular commentator on top-flight English football action in the 1971–72 season. From here, he went from strength to strength, gradually becoming the nation’s favourite football voice.

Throughout his career, Motson has made his job seem easy, effortlessly rolling the complex names of unknown foreign players off his tongue where others would have been left baffled. Perhaps Motson’s expertise is why the work of a commentator is often taken for granted by viewers, who expect the highest standards week in week out, without really understanding its difficulties. Football fans see it as the best job in the world - you get to watch and discuss the highest quality football matches every week, so how difficult can it be?

Unfortunately for Motson and his colleagues, it is really not as simple as it may seem. His former BBC colleague Steve Wilson recalled Motson describing a live football commentary as “probably the longest continuous, unscripted piece of TV anyone is ever likely to be required to produce.” Wilson added, “To be doing that to the highest standard, always under serious scrutiny and considerable pressure, for 50 years is extraordinary.”

Fellow BBC commentator Mark Lawrenson echoed Wilson’s view, affirming that “until you have commentated I don't think anyone can realise how difficult it is. When you are the England commentator it is the most difficult job of them all - you cannot make a mistake and the guys are consumed by not getting anything wrong.”

Motson undoubtedly has a unique natural talent but, as any expert in their field will tell you, this is not enough to take you to the top. Motson modestly describes the criteria for his job as needing “a decent voice, a sense of timing, and to know when to talk and when not to talk.” But as anyone who has met him will tell you, Motson was as thorough as was physically possible. His detailed notes were as much a feature on his first day of commentary as his last. He was the model professional. In the words of former BBC Director General and FA Chairman Greg Dyke, “He knew everything about football, he had every fact. I have sat next to him when he’s doing it – it was unbelievable.”

Thankfully, it is not the end for Motson, who has promised his broadcasting career is not finished yet. However, it will be a strange feeling for fans tuning into Match of the Day next season, only to be without the comfort of Motson’s familiar voice guiding them through a match. A legend of the broadcasting game, Motty will be sorely missed.