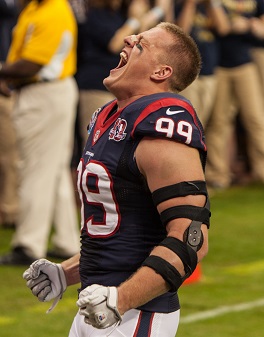 In the midst of natural disasters and tragic incidents, the world often looks to its cultural icons for inspiration and support, as residents and communities begin the long process of rebuilding their lives.

With over 20 trillion gallons of rainfall, Hurricane Harvey has wreaked havoc in the American state of Texas this week, tragically leading to over forty fatalities and requiring an estimated $200 billion for structural and personal repairs to the city of Houston and surrounding areas.

Whilst many celebrities made one-off donations that will no doubt provide much-needed relief to families throughout Texas, one National Football League (NFL) player has gone above and beyond in his efforts to help his adopted home state.

On the pitch, Houston Texans defensive end J.J. Watt is used to making his presence felt, having won three Defensive Player of the Year awards since being drafted by the team in 2011. But away from the sport he is also using his influence to affect positive change.

As the colossal devastation of the storm was realised, Watt set up a “YouCaring” donation page with the hope of raising $200,000 for the relief fund. However, he surpassed that total in under two hours, causing the site to crash due to overwhelming demand. Five days on, the total now stands at over $14 million, and is continuing to grow.

Social media has provided a global platform for Watt, who has 3.96 million followers on Twitter and 2.7 million on Instagram. Here he communicates updates and announces new targets, whilst also reaching out to celebrities such as Drake, Ellen de Generes and other NFL teams, such as the Tennessee Titans.

Through his videos and tweets, Watt has been speaking directly to those who have donated, as well as the victims. His informal, unedited style of video resonates with a global audience, presenting Watt as a relatable and invested member of the community.

“Absolutely incredible,” Watt wrote after the site broke the $10 million barrier. “The most difficult times bring out the best in humanity.”

“I cannot thank everybody enough. We have trucks being filled up as we speak; that’s phase one. We have things like water, food, generators, baby supplies, cleaning supplies… Houston, we are thinking of you.”

Watt’s new total target is $15 million, and he is likely to break that way before the Texans’ week one game against the Jacksonville Jaguars on 10 September.

“I'm not just here for the initial fundraiser," Watt said. “I'm here to make sure that we take care of people down the road.

“I talked to some of the companies that helped (in New Orleans, following Hurricane Katrina) and the best thing that people have told me so far is take your time to make sure you do it right.”

The actions of Watt and his team mates give credibility to the world’s societal view that athletes should be seen as role models who use their popularity for the good of people around them. Watt could have donated privately and carried on with his life, but instead he chose to stand up and rally the world into uniting together.