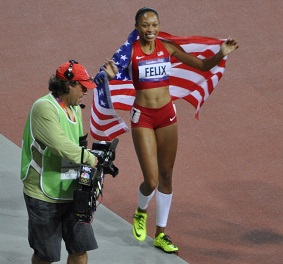 For over 12 years, American sprinter Allyson Felix has dominated the track. From 2005 in Helsinki, where she became the youngest ever 200m IAAF world champion, Felix has been ever-present on the podium.

The six-time Olympic champion made more history earlier this month in London when she secured a record 16th World Championships medal and, at 31 years old, shows no signs of slowing down. Felix is already looking ahead to the Tokyo 2020 Olympic Games. Selection would make her a five-time Olympian, equalling the US record and providing an opportunity to add to the nine Olympic medals already accrued.

However, it is not just events on the track that motivate Felix. Having grown up in Los Angeles, she was a vocal ambassador for the LA 2024 Olympic Games bid and delivered a passionate speech about the strength of America’s diversity at the Association of National Olympic Committees (ANOC) General Assembly last year, following the election of President Donald Trump.

"Some of you may question America's commitment to its founding principles," she said. "I have one message for you: please don't doubt us. America's diversity is our greatest strength. (America) needs the Games to help make our nation better, now more than ever.

“But we're not a nation that clings to our past, no matter how glorious, or how painful. Americans rush toward the future. I believe LA is a perfect choice for the 2024 Games, because the face of our city reflects the face of the Olympic Movement itself."

The speech had a powerful impact on those in attendance, diffusing some of the tension that had been prominent ever since the election results were announced.

Felix is also involved in numerous charitable causes and has a passion for improving the fortunes of children and women around the world. As well as inspiring athletes on the track, Felix finds fulfilment in changing the landscape of athletics, having also served on the President’s Council on Fitness, Sports & Nutrition.

Within her own 4x400m relay team, Kendall Ellis is 10 years younger than Felix and with the burgeoning talent in the United States, there is stiff competition for places in every event. But Felix believes that it is her longevity that provides her with a crucial advantage.

“I have amassed all this experience that I can use. I remember when I was the youngest on the team, but now, I am one of the oldest and I can train smarter. Less is more, which is really key.”

Felix’s official split time of 48.7 seconds in the 4x400m relay was the fastest in the team and established the USA’s dominance in the penultimate event of the London 2017 World Championships. It is not just her leadership and invaluable expertise that keep her in the squad, but the performances themselves that justify her place on their own merit.

JTA has reached a milestone of 200 Communicators of the Week after four years of the weekly article, which started with IOC President Thomas Bach in 2013. Many thanks to all the athletes and leaders who continue to inspire the sporting world.