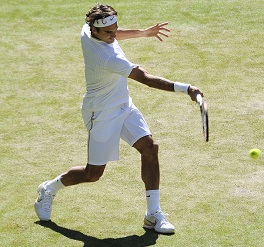 It took just one hour and 41 minutes for Roger Federer to beat Marin Cilic last Sunday, etching his name once again on to the Roll of Honour and further into the record books.

2017 has been a phenomenal year for the 35-year-old Swiss, who hadn’t won a Grand Slam since 2012 and whose best career years looked to be behind him. Having fallen out of the world’s top 10 and after sustaining multiple injuries in 2016, questions regarding Federer’s future were often on the agenda.

The bounce back has been remarkable and, in January, Federer won the Australian Open to make him the oldest winner of any major since Ken Rosewall, aged 37, in 1972. Even more impressive was that Federer recorded the highest number of five-set victories of any champion in the tournament’s history.

After winning his 25th Indian Wells title, Federer began preparations for his favourite tournament. Unlike the Australian Open, he waltzed through the two weeks at Wimbledon without dropping a set, the first man to achieve such a feat since Bjorn Borg in 1976. His record-breaking eighth Wimbledon success won’t be remembered like the classics before it, but it adds to the legacy of a player whose effortless style and grace on the court have won him admirers the world over.

Wimbledon has seen many notable champions over the years but it is Federer’s inimitable style, accolades and numerous records that leave him head and shoulders above all others in the pantheon of iconic tennis players.

The feeling is evidently mutual with Federer repeatedly stating his affection for the oldest Grand Slam tournament in tennis.

“It’s a big deal for me to make history here,” he said, ahead of the final with Cilic. “I love this tournament. All my dreams have come true here as a player.”

In their latest campaign Nike congratulated Federer on his unprecedented success by memorialising the Wimbledon win. Replacing the “g” in Roger with an “8” in their latest advert, the sportswear giant paid homage to an athlete who has been at the top of his game since 2003.

Between that first Grand Slam win and the present day, Federer has collected 19 majors, including five consecutive Wimbledon and US Open titles, set the record for 237 weeks atop the ATP World Rankings, reached every Grand Slam semi-final for six straight years and has won just about everything there is to win, including an Olympic gold medal in 2008.

How long will he maintain this fairy tale career? Federer has revealed that discussions about retirement have begun, but although the body may be slowing down it is clear that the competitive nature has no intention of following suit.