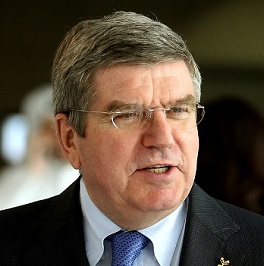 International Olympic Committee (IOC) President Dr Thomas Bach made history this week when IOC Members unanimously approved his proposal to award both the 2024 and 2028 Olympic Games at September’s 131st IOC Session in Lima.

The landmark decision was made at the 130th Extraordinary IOC Session in Lausanne on Tuesday, leaving the two remaining 2024 bid cities, Paris and Los Angeles, to negotiate a tripartite deal with the IOC before September’s Session. At a critical juncture for the IOC, with bidding for the Games becoming increasingly unattractive, Bach responded brilliantly to the pressure to find a way to make hosting the Games a more appealing prospect.

Faced with an ever-growing bidding crisis, with major cities Rome, Budapest, Hamburg and Boston all withdrawing their candidacies for the 2024 race, Bach’s response showed creativity and excellent leadership. With two excellent bids for 2024 in Paris and Los Angeles, Bach appointed the four IOC Vice Presidents to review the concept of a dual award. After this was unanimously approved by the IOC Executive Board on 9 June, an Extraordinary General Assembly was called where IOC Members were asked to ratify the decision.

After the decision was announced, Bach revealed that it was only the second time he had been stunned into silence by good news, the first being after he was elected IOC President in 2013. He stated that the move would “ensure the stability of the Olympic Games for 11 years (which) is really, in our world, something extraordinary”. He then added, “It is a great day for these two wonderful cities, two great Olympic cities, as we have now created a foundation on which we are very confident we can build the win-win-win situation we are all longing for.”

It is important to note that this is not the finish line for Bach, and he must continue to work hard with Paris and Los Angeles to reach a deal before the September Session. The two cities must reach a tripartite agreement with the IOC that will determine which city gets 2024 and which gets 2028. If they cannot reach an agreement, IOC Members will vote on which city gets 2024, and Bach’s proposal for a dual award will be scrapped.

However, Bach is confident that a deal will be reached by August at the latest, with his innovative approach set to secure the summer Games for over a decade. Both the Paris and Los Angeles bids plan to use almost entirely existing or temporary stadiums, use the Games as a way to accelerate public infrastructure projects, and will draw heavily on private investment – protecting the public from cost issues. Bach is convinced that the two “outstanding” proposals will change the nature of the bidding process indefinitely.

Bach’s creativity and willingness to break with tradition, and his ability to convince all Members to support him, are a demonstration of his excellent leadership and communication skills. For a move that will leave a lasting legacy for the Olympic Movement, President Thomas Bach is the JTA Communicator of the Week.