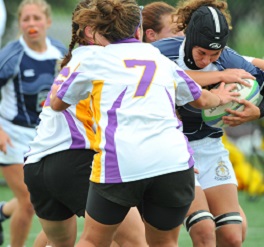 Scotland’s national rugby team may not have been able to halt the English juggernaut at Twickenham last Saturday, but Scottish rugby is making significant strides off the field in the women’s game.

Scotland Women’s latest campaign, #BeTheBestYou, is aimed at highlighting the positive benefits of playing rugby to women and girls across Scotland. Unveiled this week, it is part of a wider strategic plan to grow rugby in Scotland, known as “Everyone’s Game”. #BeTheBestYou is specifically aimed at communicating a message of inclusivity, and the campaign wants to capitalise on the growing popularity of rugby in Scotland to help shift the outdated perception that the rugby field is a male-only zone.

The creative, engaging and empowering campaign communicates a powerful message: “Be bold and try something new with your friends. Be active and make healthy choices. Be powerful and discover new skills you didn’t know you have. Be a team and have a laugh with your mates. #BeTheBestYou.”

The campaign will be an exclusively digital communication, using video, digital creatives and social media interaction to help appeal to the younger generation. The adverts will showcase the friendship, enjoyment and personal development associated with the sport, using existing players as role models.

#BeTheBestYou follows a good few weeks for women’s rugby in Scotland – at the end of February, Scotland Women recorded their first win in the Women’s Six Nations tournament since 2010, defeating Wales 15-14.

There has been remarkable improvement in women’s rugby in Scotland both on and off the field in recent years. This is largely as a result of the appointment of Sheila Begbie as the Head of Women’s Rugby in 2014. The former Head of Women’s Football at the Scottish FA is keen to capitalise on the marked improvement of the national side and use rugby as a method of social betterment: “There are many reasons why people take up a particular sport, to keep fit and test themselves physically, however with this campaign we wanted to show there is a lot more to women’s rugby than simply the physical benefits of being active and want it to really help raise its profile and get people talking about the game and how enjoyable it is on many different levels.”

Whilst Begbie is clearly having a significant impact, the success of the women’s game in Scotland is the result of a process which began years before her appointment. After she joined Scottish Rugby in 2014, she said: “One of the things that has really impressed me has been the vision from Scottish Rugby's Chief Executive (Mark Dodson) and Board in terms of what their aspirations are for the women’s game – there’s a real desire to support the growth of the game.”

#BeTheBestYou’s promotion of friendship through rugby has been welcomed by Scottish international player Emma Wassell, who said: “It (rugby) is a sport that welcomes everyone and you very quickly make friends and create bonds that last. The physical side of the game is fun, it gives you a goal to train for and there is no better feeling than winning a match with your friends.

She added: “The values of rugby make the game what it is and for me it creates a very respectful and positive environment for young players to develop in. I hope this campaign gets people talking about women’s rugby and our sport continues to grow.”

According to World Rugby statistics, there are now in excess of 2.2 million women and girls around the world playing rugby.  #BeTheBestYou is another step to making rugby a level playing field.