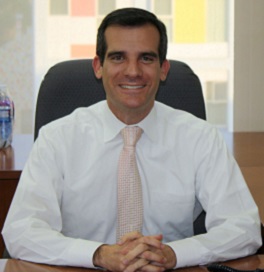 Mayor Garcetti’s re-election as LA Mayor this week is a reflection of his expertise in both communicating and delivering on a clear vision for the future.

He received 81% of the votes in Tuesday’s municipal elections, defeating his nearest rival by an overwhelming 73% - a result which gives 46 year-old Garcetti the chance to build on the impressive progress he made during his first term.

After the election results were announced, Garcetti said: “I am honoured and humbled to have been entrusted with a second term by the voters of Los Angeles. We Angelenos have achieved a great deal together over the last four years, but we have big dreams and work still to do.”

Garcetti was elected for his first term in 2013 after campaigning with a simple but effective “back-to-basics” slogan. The progress he has made since then has been remarkable – successfully tackling issues from job growth to homelessness to traffic relief. However, for Garcetti, his first four years were just the beginning of his and LA’s journey - the foundations for achieving a lasting legacy.

A victory in the race to host the 2024 Olympic Games would undoubtedly secure Garcetti’s legacy. A prominent advocate from his first day in office, Garcetti has been pivotal in communicating the reasons why LA is the right city to carry the Olympic Movement forward. LA 2024 Chairman Casey Wasserman expressed this view following the election results, saying: "Mayor Garcetti has been LA 2024’s leading advocate since day one, and his vision and enthusiasm for this project will be a tremendous asset for us in the final six months of the bid,”

Garcetti has clearly and effectively communicated how an LA 2024 Games fits into his wider vision for the city. A prime example of this is his action on climate change. He has pledged to reduce city-wide greenhouse gas emissions by 45% by 2025, 60% by 2035 and 80% by 2050, and become the nation's first big city to achieve zero waste. He has repeatedly communicated the message that the 2024 Olympic Games are the perfect platform to display LA’s leading technological innovation and how this will help the city achieve its sustainability goals.

Garcetti’s ability to communicate how the LA 2024 Games would contribute to a wider legacy for LA was on display following his election, when he said: "Now we continue our journey towards opportunity, global leadership on the defining issues of our time and hosting an exceptional Olympic and Paralympic Games in 2024 that welcomes the world to the city of the future."

Garcetti’s message after the election result was simple: “The job of the Mayor is to get things done, and that's what I'm going to keep doing for our city.” An expert communicator, effective campaigner and progressive leader, Garcetti is undoubtedly the right person to take the city forwards.