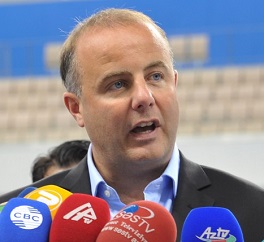 It’s been 24 hours since Irish sports administrator Pierce O’Callaghan was announced as Chair of a task force examining the credibility of previous European records in athletics, and his in-tray is already piling up with suggestions from every corner of the sports world.

The task force – commissioned by European Athletics – has made headlines in the mainstream sports media around the world, whilst the debate on social media has been non-stop.

Current and former athletes, journalists, sports administrators and, most of all, members of the public have weighed into the debate so far.

This was to be expected, but what was not so expected was that O’Callaghan, a former Irish champion racewalker, would weigh in to the debate so intensely himself, responding personally to more than 100 users on social media so far.

“I’m not going to be sitting in a golden castle deciding what needs to be done by myself,” O’Callaghan told the JTA Communicator of the Week column in an exclusive interview.

“The world’s changed in the past few years and we can’t go back. We’ve got to be accountable and we’re got to be transparent. That’s why I’ve been responding to as many people as I can on social media, and also to encourage them to get involved themselves.”

Collaboration is an integral part of the plan for O’Callaghan and his task force as they look into eyebrow-raising records from the past and aim to establish “serious proposals” for the European Athletics Executive Board to consider in September.

O’Callaghan added: “We’ve got nine months. But as volunteers for this task force we’ve all got other jobs so we want to engage with members of the sporting public far and wide to get their opinions and ideas – even their stories and anecdotes. It will all help.”

Whether O’Callaghan and his task force can successfully help solve a long-standing and thorny problem in athletics – one full of ethical considerations and practical limitations – is a matter for the future.

What’s clear now is that his approach is bold, ambitious, and ahead of the curve.

To get in contact with the task force with your own comments or suggestions, European Athletics have provided the following email address: This email address is being protected from spambots. You need JavaScript enabled to view it. and are encouraging social media users to use O'Callaghan's own twitter handle: @pierceathletics.