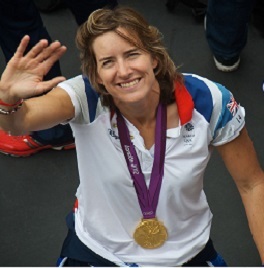 For British rower Katherine Grainger, the start of 2017 has brought royal recognition in the form of a knighthood, rewarding the five-time Olympic medallist for her services to sport and charity.

Her immense dedication over twenty years of elite sport has communicated a strong message of perseverance, hope and spirit. Her incredible career has epitomised the meaning of determination – every time she has faced a setback she has responded like a true champion.

Grainger’s ultimate dream came true at London 2012. To the joy of British fans her heart-breaking string of Olympic silver medals ended when she won a home gold in the double sculls at Dorney Lake. Rewind four years to the Beijing Games when, at the age of 32 and with three consecutive Olympic silver medals to her name, you could easily have forgiven Grainger for retiring from the sport. But for someone with her level of drive and ambition, this was never an option.

In a tearful interview after winning in 2012 Grainger said, "It was worth the wait. Steve Redgrave promised me there would be tears of joy this time and there are. For both of us we knew we had the goods to perform and it was about delivering." Her refusal to give up on her dream, to fight in the face of adversity, has inspired thousands of people across Britain to engage in sport and emulate her never-say-die attitude.

Reflecting on Grainger’s honour, British rowing chairman Annamarie Phelps said, “Katherine has inspired many people, especially women, to get into sport throughout her career and I am delighted that her contribution to rowing, as well as the wider community, has been recognised in this way.”
Despite only retiring from rowing after Rio, Grainger’s off the water CV is incredibly impressive. She holds a PhD in Philosophy from Kings College London, a law degree from Edinburgh University and has been awarded seven honorary doctorates. She is also involved in numerous international charities and is currently the Chancellor of Oxford Brookes University.

Grainger’s heart, however, lies in sport. Looking to the future she is determined to continue influencing the next generation: "I don't know what role that would be, but I will certainly always have sport as part of my life - it is just part of my DNA now and I want to be able to again use my experience and knowledge in some way to help others now.”

Her presence on the water will certainly be a great miss, but British rowing performance director Sir David Tanner CBE believes the message of resilience she has communicated throughout her career will resonate for many years to come. He said: “With her brilliant record of five medals from five consecutive Olympics, she has proved an outstanding role model for the younger members of the team over the past 20 years and I’m sure her achievements will continue to inspire future generations.”

Katherine Grainger defines what it means to be dedicated to your craft and her unyielding pursuit of success communicates a message of hope that every aspiring sportsman or sportswoman can relate to.