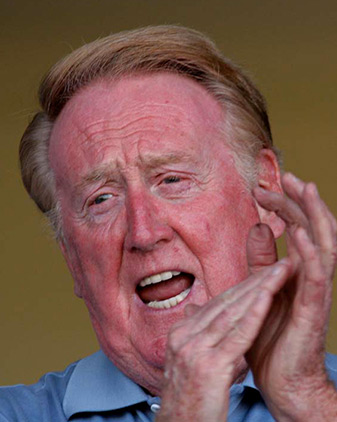 The greatest sports photo not to involve competition action may well be one taken earlier this week at the White House. On the left is Michael Jordan. On the right is the NBA’s leading all-time scorer, Kareem Abdul-Jabbar. In the middle is the recently-retired legendary broadcaster Vin Scully (and photo-bombing in the background is Bruce Springsteen). All four were awarded the Presidential Medal of Freedom, the highest civilian honour in the USA. The award ceremony saw America’s sporting heroes on a par with titans like Bill Gates.

Originally from the Bronx, Scully’s love affair with professional baseball began at the age of eight. That year he also became fascinated with radio coverage of American football games and set his sights on becoming a sports broadcaster. Eighty years on, many think of him as the American baseball broadcaster.

Scully spent no fewer than 67 seasons as the play-by-play announcer for the Dodgers: first in Brooklyn and then in Los Angeles, after the team moved there in 1958. In calling the plays he brought lyricism, stories, humility and an abiding love of America’s favourite pastime.

Contemporary competitions are typically broadcast by pairs of announcers. One calls the play-by-play and the other offers colour commentary. But as President Obama remarked: “Vin worked alone, and talked just with us.” 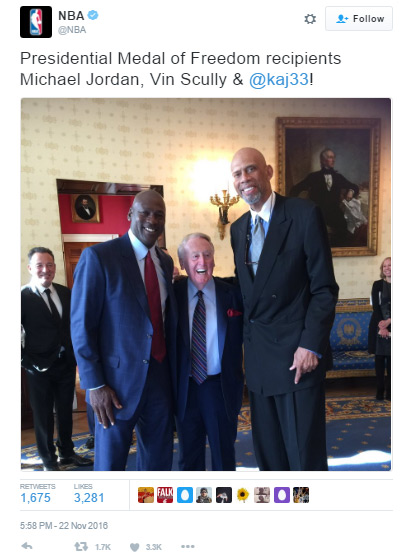 Scully liked to imagine himself as a friend of the spectator, sitting beside the fans and simply enjoying the game with them. The style endeared him to a nation. Scully explained: “The game is just one long conversation, and I'm anticipating that, and I will say things like 'Did you know that?' or 'You're probably wondering why.' I'm really just conversing rather than just doing play-by-play. I never thought of myself as having a style. I don't use key words. And the best thing I do? I shut up.”

Scully’s compelling approach made his commentary a must-listen. As President Obama explained: “Most fans listen to a game’s broadcast when they can’t be at the ballpark. Generations of Dodgers fans brought their radios into the stands, because you didn’t want to miss one of Vin’s stories.”

For a sense of just how many fans Scully touched, just at the ballpark, last season alone the LA Dodgers drew more than 3.7 million attendees to top Major League Baseball.  And for a sense of how much he meant to his team, the address of the stadium, just a stone’s throw from downtown LA, is 1000 Vin Scully Avenue.

For a lifetime dedicated to bringing the sport he loved to millions, Vin Scully is JTA’s Communicator of the Week.