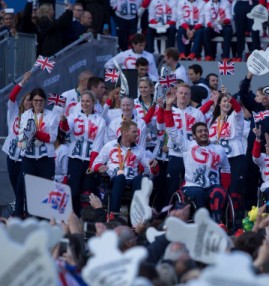 On Monday, more than 150,000 fans turned out in Manchester to watch this year's Olympians and Paralympians tour the city, with thousands more descending on London's Trafalgar Square on Tuesday to catch a glimpse of the teams that made Great Britain a sporting superpower.

Of course, not everyone who shared the highs and lows of Team GB's and ParalympicsGB's Olympic and Paralympic journeys was able to make it to the parades this week. But thanks to social media, that didn't mean they had to miss out on the action.

Team GB and ParalympicsGB took to Facebook, Twitter, Instagram, Snapchat and Periscope to spread the enthusiasm across the country, keeping their followers updated with plenty of videos, photos and posts from the athletes themselves. Whether it was Tom Daley sat among the pigeons in Trafalgar Square or judoka Jonathan Drane dabbing on the bus in Manchester, it was possible to keep up with every wonderful minute.

At the parades following the Beijing 2008 Olympic and Paralympic Games, this level of engagement simply wasn't possible. But today this very personal mode of broadcasting means that not only can anyone feel a part of the homecoming celebrations, they can also get an insider's look at the festivities. Even if you attended the parade in person, social media would no doubt give the day a fresh perspective.

Ever since 2012, Great Britain has been a nation completely enamoured with the Olympic and Paralympic Games. Stars like Adam Peaty, Ellie Simmonds and Laura Trott now transcend the world of sport and have become national treasures, inspiring every one of us to become better versions of ourselves. While it is unclear how long this level of passion can last, for now Team GB and ParalympicsGB certainly know how to keep the enthusiasm alive.