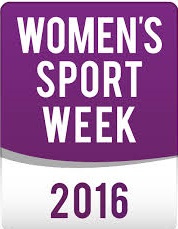 At the Rio 2016 Olympic Games, more than 45% of the 11,303 competing athletes were women. Compare this with just over 13% female participation 52 years ago at the 1964 Games in Tokyo and the 45% statistic becomes even more compelling. But, of course, the movement to achieve complete gender equality doesn't just stop at a statistic. In the UK, Women's Sport Week returned for a second year this week, looking to build on the positive momentum from Rio and raise the profile of women's sport in the UK.

The initiative, created by the UK Department for Culture, Media and Sport, has been backed by national federations, Sport England, Women in Sport, Women's Sport Trust and major broadcasters, including the BBC. In celebrating and showcasing women's sport at every level, while highlighting the incredible contribution that women make to sport, the week aims to get more women physically active and playing sport.

Competing for space among the back pages of newspapers has always been a struggle in the male dominated world of sport but after launching last June, Women's Sport Week has gone some way to changing this by creating a platform for women's sport to be talked about and celebrated.

Reflecting on the importance of media coverage for women's sport, four-time Olympic medallist and Women in Sport patron Rebecca Adlington said: "The visibility of sport for young girls – in our everyday lives, in the media, through more women's sport on TV – is at the heart of keeping them motivated and engaged, not just every Olympic cycle or for an amazing week out of the year."

Adlington's thoughts were echoed by the Chair of Women in Sport, Sally Hancock, who also talked about the need to normalise women's roles in sport.

"We've seen an increase in the number of women being represented on sports boards. But there's still a long way to go. It can still feel like women's sport is invisible. You have to absolutely seek it out to find any news. Why isn't women's football on Match of the Day every week? We have to normalise women's sport. We need to make it part of our overall vernacular about sport and not simply park it at odd times of the day on obscure channels or odd blogs and hope that somehow this is going to inspire a generation – because it isn't," Hancock said.

Women's Sport Week has opened up the discussion on gender equality in sport and it is initiatives like this which can help turn 45% female participation at an Olympic Games into 50%.