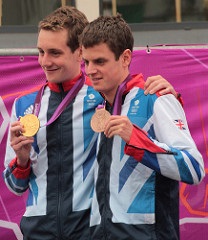 What is it that makes a moment in sport so popular that it quickly goes viral across social media, passed along even by those who usually skip the back pages of the newspaper? Only rarely is conventional sporting action enough.

Last weekend, a fraternal gesture had all the necessary components for widespread sharing. The Brownlee brothers delivered a fresh scene from their double act in Cozumel, at the ITU World Triathlon Series final.

To win the series, younger brother Jonny needed to win the final race and for the Spaniard Mario Mola to finish no higher than fourth. In the lead with just 700 metres to go, however, Jonny felt the sudden onset of heat exhaustion. Near to collapse, he found older brother (and Rio 2016 Olympic champion) Alistair coming to his aid. While outside assistance is banned in triathlon, as in other sports, aid from other competitors remains within the rules.

Alistair put his arm around his brother and supported him throughout the final part of the race, literally shoving him across the line. It wasn't enough to win the race, but it was more than sufficient to win the hearts of millions who watched the video of the race and subsequent interviews and TV appearances.

Adding to the interest of the story itself was the refreshingly candid way the brothers talked about each other. They clearly feel great affection for each other, as evidenced in the widely-spread images of their embrace after crossing the Rio 2016 finishing line in the first two places. But, being brothers, they are also not afraid to have a dig at each other too. And it makes for great television.

"To be honest, I wish the flipping idiot had just paced it right and crossed the finish line first. I mean I t was very nice, but he could have won it easy. He could have jogged that last 2k and won the race," said Alistair immediately after the competition. Such frankness in an era of slick soundbites from highly media-trained athletes added unmistakable authenticity to the moment.

Especially when they are together, the Brownlees seem incapable of being anything else but their original selves. On the sofa of ITV's This Morning, following their return from Cozumel, the brothers provided yet more shareable moments. Jonny's claim that he'd return the favour, unless it meant losing out on another Olympic gold medal, quickly did the rounds of UK media.

Authenticity has proven to be vital to social media success. It cannot be forced. The Brownlees provided it with an unscripted and resonant moment, supported by unscripted and genuinely interesting comments. For this, they are JTA's Communicator of the Week.