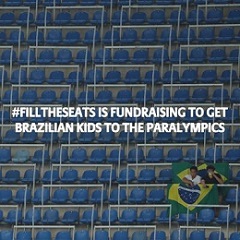 On Wednesday night, 78,000 people in the Maracanã Stadium and millions more around the world were left in awe as the Paralympic Games opened with an astounding show of human spirit and courage, setting the scene for the next 11 days of competition.

The stadium was left stunned as extreme wheelchair athlete Aaron Fotheringham propelled himself down a six-storey high ramp and somersaulted through a hoop. It was a fitting lift off for the Games which have been declared by Paralympians, with tongue in check, as the main event to follow on from the Olympic Games warm up. This time last month, only 12 per cent of the 2.5 million Paralympic tickets had been sold. But with the help of the #FillTheSeats crowdfunding campaign, this event is now drawing the crowd it deserves.

#FillTheSeats was set up by former London 2012 marketing director Greg Nugent and has since received backing from Rio 2016 and the International Paralympic Committee. But #FillTheSeats isn't just a desperate campaign to fill the seats with anybody. What makes this campaign special is how the money raised will allow Brazilian children and people with an impairment, who would otherwise be unable to attend, to go and watch the Paralympic Games.

Having only been launched on 23 August, the campaign originally aimed to raise $15,000 to send 500 youngsters to the Games, but reached this target in just 72 hours. With a trending hashtag on Twitter and endorsement from Coldplay, who shared the campaign with their 17.4 million followers, #FillTheSeats also drew a personal donation from Invictus Games founder Prince Harry. He made a personal donation, helping the campaign to raise $230,000 in just 17 days.

The crowdfunding campaign acknowledges the importance of the Paralympic Games to the world's changing attitude towards people with an impairment and calls on the world to donate. And creator Greg Nugent believes the simplicity of it has been the key behind its success.

Speaking to PR Week, he commented: "The absolute truth is that I don't think you could orchestrate something like this because it has just taken on its own momentum and it's a really positive one.

"This literally has just been me taking about a week and a half off work. This is something that just caught people's attention and that people have liked, so there's no team, no nothing, it's just happening."

After a troubled build-up to the Paralympic Games, #FillTheSeats encompasses everything the Paralympic Games represent: triumph over perceived adversity. Tickets for the Games have now passed the 1.6 million mark with the help of additional efforts from the IPC and the Rio 2016 organisers. With the world coming together to help fill the seats with kids, the Paralympians will know that support for them knows no limits.