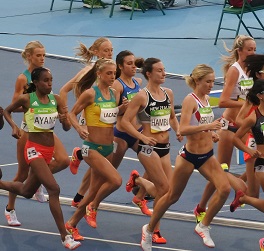 The Rio 2016 Olympic Games have had their fair share of memorable moments. Unprecedented wins in sports such as swimming and gymnastics have helped Team GB to second place in the medal table (as at 15:30 19/08), while legendary athletes from across the globe have returned to secure their place in the history books. And then there's Abbey D'Agostino and Nikki Hamblin – two runners who have shown that you don't need a medal to become an inspiration.

There were four laps to go in the 5000m qualifier when the athletes from the US and New Zealand collided and fell. D'Agostino was soon back on her feet and ready to continue the race, but instead she stopped and turned to the collapsed Hamblin, offering words of encouragement and helping her to her feet.

It wasn't long until the New Zealander was able to return D'Agostino's favour, with the American obviously struggling after the fall. Hamblin stayed behind to make sure her opponent was stable and then waited at the finish line to offer D'Agostino a well-deserved hug; she had just completed her final laps with a torn cruciate ligament.

Coming 16th didn't seem to bother Hamblin as she reflected on the day's events. "When I went down it was like, 'What's happening? Why am I on the ground?' And suddenly there's this hand on my shoulder, like 'Get up, get up, we have to finish this!' I'm so grateful for Abbey for doing that for me. That girl is the Olympic spirit right there.

You just need to check Twitter to see how many people were touched by the message of Olympism conveyed through the pair's actions. Meanwhile, appeals on the ground ensured that both runners were advanced to today's final, despite coming last in their qualification race.

All this proves that, while we may relish the opportunity to watch people test the boundaries of human capability, what moves us most about the Olympic Games are their reassuring acts of innate human kindness. We love to see athletes push themselves to become faster, higher and stronger, but sometimes that's not the point.