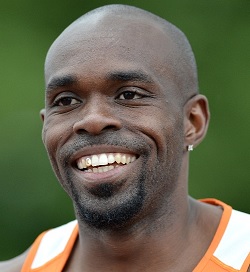 It could never be said that the new European 100m champion Churandy Martina doesn't take his post-race media duties seriously.

If it was up to the Netherlands speedster – who claimed the first Dutch gold medal of the European Athletics Championships in Amsterdam on Thursday – he would write the race report himself after taking off his spikes.

Instead the 32-year-old settles for bouncing up and down the mixed zone whilst giving interviews in Dutch and English, writing extended diary entries for his personal website and chatting about whatever takes his fancy on Twitter and Facebook.

And this week Martina has not been short of material to communicate. As an ambassador of Amsterdam 2016, the Dutch record holder in the 100m and 200m, was to the fore during the opening ceremony on Wednesday presenting King Willem-Alexander of the Netherlands with his bib-number.

The next day, he left it late in the 100m final but squeaked the gold medal after a flying final 50m in which he went from last to first. Cue wild celebrations from the home crowd (who have been somewhat starved of sporting excitement this summer with their beloved football team failing to qualify for the European Championships) and a local media pack lining up to get a piece of Martina in the mixed zone.

As he remarked in one of his first interviews after the final: "I know everyone wants to talk with me.....and I want to talk to everybody too!"

As fun-loving and relaxed as Martina comes across he is also a flagbearer for his country, his sport and Dutch athletics – a role he fulfils admirably.

In every post-race interview, Martina put across a version of the following quote: "to do it at home in front of the people from the Netherlands and from Curacao (the country of his birth) is the best feeling ever."

He was also keen to impart words worthy of any #MotivationMonday social media campaign. As he told one journalist in the mixed zone: "Once you start you gotta go for gold. Don't put yourself second."

Martina has had a career on the track of ups and downs. He represented the Netherlands Antilles in international competition (acting as their flagbearer at two Olympic Games) until the dissolution of the country in 2010. He's also been through the frustration of having an Olympic silver medal taken away from him at Beijing 2008 for stepping out of his lane (an indiscretion he repeated in Amsterdam on Friday night when defending his 200m title).

But overall, Amsterdam 2016 marks a return to happier times for the ever-smiling Martina, and he's desperate to tell people all about it.