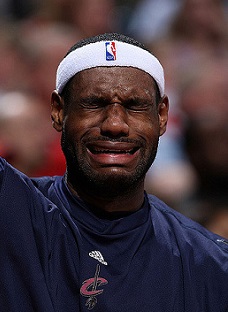 The most carefully scripted and carefully planned communications in sport are of the professional American variety. No moment is left to chance.

Take the NBA Championships, won by the Cleveland Cavaliers last Sunday night, and in particular the locker-room victory celebrations (https://www.youtube.com/watch?v=3xTtOi5qy8k). The media have been granted locker room access to professional American sports teams since the 1940s. The resulting content has become heavily ritualised and commercialised: pre-game locker room Periscope segments are even part of the NFL's deal with Twitter https://nflcommunications.com/Pages/National-Football-League-and-Twitter-Announce-Streaming-Partnership-for-Thursday-Night-Football.aspx).

The images of Cavaliers spraying each other with sponsor-provided champagne were carefully staged. The lockers themselves were covered with plastic sheeting. The sheeting was then adorned with the team's emblem. The players, meanwhile, were given ski masks. These were branded with the logo of the team's clothing supplier. Amid such heavy scripting, the players can often come across as clichéd. The moments can appear to lack both spontaneity and authenticity.

On Sunday however, a champion stepped up his game and provided one of the most astonishing plays ever seen in the NBA: a game-changing block (http://deadspin.com/lebrons-block-still-doesnt-seem-possible-1782300645). And his impact post-game as a communicator was just as powerful, if not more so.

At the final buzzer, LeBron James collapsed to the floor in tears of genuine joy (https://www.youtube.com/watch?v=kcgTtgB8rC4). The tears continued to run down James's face during his post-game interviews, lending his words a unique resonance. James went on to complement his spontaneous emotion with careful judgment.

American professional sportsmen and women now have an intimate understanding of the power of their own brands, and also the importance of owning their own content. All of the winning players stepped off the plane back to Cleveland with a smartphone camera rolling. James went a step further, showing a canny eye for a social media meme.

Despite his umpteen-million-dollar deal with Nike, James was wearing an off-brand t-shirt celebrating the wrestler Ultimate Warrior: a pointed reference to his dominant performance against losing finalists, the Golden State Warriors. He was also wearing a hat featuring Kermit the frog sipping tea, a reference to the "none of my business" meme. Twitter, Instagram and Facebook erupted.

James's own Instagram post (https://www.instagram.com/p/BG5Byk7iTGF/) featuring his hat was liked more than a million times within 12 hours of being posted. His post was full of enough spelling mistakes to make most proofreaders faint. But to his fans, this was simply further confirmation of James's authenticity: a true brand amid scripted fakes. For his articulation of his authentic self, LeBron James is JTA's communicator of the week.