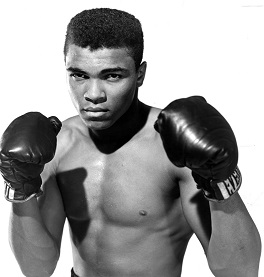 The athletic gifts of Muhammad Ali, who died a week ago aged 74, were matched only by his eloquence. The combination was apparent from the outset of his career. While becoming Olympic champion at 19, Ali was not content with simply demonstrating his talent in the ring and captivated fans and the press at Rome 1960 with his spoken word poetry.

Not long after, an encounter with a professional wrestler promoting an upcoming show would lead Ali to use his eloquence for shameless self-promotion. Ali later told his biographer: "[Gorgeous George, the wrestler] started shouting: 'If this bum beats me I'll crawl across the ring and cut off my hair, but it's not gonna happen because I'm the greatest fighter in the world.' And all the time, I was saying to myself: 'Man. I want to see this fight' And the whole place was sold out when Gorgeous George wrestled ... including me ... and that's when I decided if I talked more, there was no telling how much people would pay to see me."

So talk Ali did. And how. He talked about his talents, his philosophy, his opponents, his ability to talk, even claiming in one 1963 talk show interview, to think in rhyme.

As with wrestling, some of Ali's verbal jabs were staged. Calling Joe Frazier an "Uncle Tom" seemed likely to have been an artifice. Later calling Ernie Terrell the same name, while meting out a cruel beating, seemed more likely to have been done with real venom. But with retirement and the passing of time, Ali no longer felt obliged to maintain the façade: "Sometimes I feel a little sad because I can see how some things I said could upset some people. But I did not deliberately try to hurt anyone. The hype was part of my job, like skipping rope."

With that same passing of time came reconciliation. Even the enmity between Terrell and Ali was replaced by gracious friendship.

The greatest of all time will rightly be remembered as both a fierce and gracious athlete and communicator. His grace was constant. It was evident from the start, in the words with which he entertained fans and the press - while thanking his hosts - as a glorious teenager in Rome.

"To make America the greatest is my goal
So I beat the Russian and I beat the Pole
And for the USA won the medal of gold.
The Greeks said you're better than the Cassius of old.
We like your name, we like your game.
So make Rome your home if you will.
I said I appreciate your kind hospitality,
But the USA is my country still,
'Cause they're waiting to welcome me in Louisville."

Muhammad Ali was welcomed home in Louisville for the last time today. May he rest in peace.