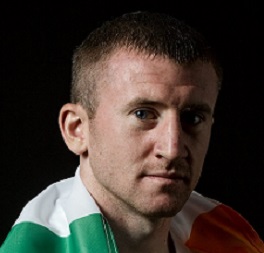 Irish boxer Paddy Barnes was this week announced as Team Ireland’s flag bearer at Rio 2016 and the two-time Olympic bronze medallist handled his first media engagements as Ireland’s leader with great maturity, as well a touch of class.

Barnes, 29, was unveiled as flag bearer during a media event in Dublin organised around the 100 days to go mark for Rio 2016 on Wednesday.

Unexpectedly asked to say a few words, Barnes – who is a prolific and entertaining tweeter – took it in his stride, taking to the stand to address his fellow athletes, Irish sports administrator and the media.

Keeping things brief, Barnes told the room: "I hold this honour up there just as high as having won the medals in London and Beijing” – and with that masterstoke of a statement, the next day’s headlines were written.

Although of course, every journalist still wanted to get time with Barnes alone, and the Belfast-born light flyweight boxer was more than happy to oblige.

Over the next hour and a half, Barnes gave interviews to radio, newspapers and television crews, posed for photos and did it all with an obvious willingness and a smile on his face, proving that the words he delivered on impulse immediately after being  announced as Team Ireland’s flag bearer were nothing short of the absolute truth.

Watching him talk about leading his countrymen and women at Rio during the Opening Ceremony at Rio 2016, you were left in no doubt that this accolade was equal to an Olympic medal.

Amongst his media duties, Barnes also found time to put out some communications of his own, tweeting about the day’s events and showing both his serious side and his lighter side.

On the morning of the event Barnes tweeted:

Whilst after the announcement he wrote:

“Extremely proud to be selected as flag bearer for Ireland at #RioOlympics2016” – for which he received 1.3K likes and 300 retweets.

Barnes’s focus this summer is naturally on individual glory in the ring – a personal sporting quest hardly reliant on the skill of his communications. But as the flag bearer for Team Ireland, Barnes now has a team-focused leadership role – one his communications skill is central to.