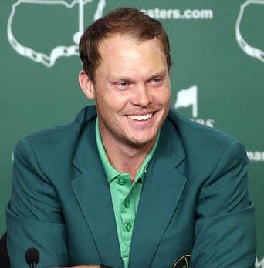 Who stole the spotlight at last weekend's US Masters? Was it British champion Danny Willett or his brother Peter, cheering Danny on from his Birmingham sofa? Whilst Danny did all the hard work by coming from five shots down against the favourite Jordan Spieth to win the title, Peter was making headlines of his own as he took Twitter by storm.

At the ninth hole of the final round on Sunday, it seemed unlikely that Willett would be lifting his maiden Masters trophy – even his coach, Mike Walker, had gone to bed for the night.

But the reigning champion Spieth then suffered one of golf's most spectacular meltdowns, dropping six shots over three holes, and practically handing Yorkshireman Willett victory on a plate.

All the while this story unfolded, Willett's brother, Peter, was providing a unique live commentary on Twitter. Amongst his popular observations and comments, he urged his brother to refuse the famous winner's green jacket because "Green makes you look fat"; told Spieth to "wind your neck in" because "you've won one before"; and made the astute observation that "if the boy does what he should, I will be able to say 'I've shared a bath with a Masters winner'". And these were just a snapshot; there were many more.

Peter's posts obviously struck a chord, with his Twitter following growing from around 300 to over 23,000 in just under a week.
And his impressive ability to grab the attention of thousands through social media led many journalists to proclaim that, while Danny won the US Masters, Peter "won Twitter".

Peter's tweets were obviously entertaining, but they also served as a reminder of Danny's humble beginnings growing up with his older brother – which Danny clearly hasn't left behind during his eight years on the professional golf circuit. After returning from Augusta to his wife Nicole and their new-born son Zachariah, the world number nine insisted he was only interested in "making sure these two are alright, and just trying to be a dad and a husband again."