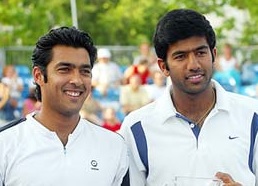 On 6 April, the world came together on the International Day of Sport for Development and Peace to recognise the power of sport to drive social change, community development and to foster peace and understanding.

Sport’s ability to bring people together is perfectly exemplified in the lifelong friendship and partnership of tennis doubles players Rohan Bopanna from India and Aisam-Ul-Haq Qureshi of Pakistan.

Bopanna and Qureshi, popularly known as “the IndoPak Express”, first played together professionally in 2007, defying the intense sporting rivalry between their two nations to pursue a higher goal: sporting excellence, respect and friendship.

Their partnership has captured the attention of tennis fans in India and Pakistan alike, uniting both nations behind one team.

And Bopanna, 36, uses this platform to speak passionately about the power of sport and the impact it has had on his life. This week he was quoted in an International Olympic Committee release, saying:

Qureshi, also 36, shares his playing partner’s drive to put sport at the service of humanity, saying:

“Peace is the only way to move forward in this world. I feel like if everybody can be associated or play any kind of sports, it will teach them to respect others - the fair play, the integrity, the friendship part - and this world will be definitely a better place.”

In 2010, Qureshi capitalised on the recognition the pair earned having reached the US Open men’s doubles final to launch a non-profit organisation called “Stop War, Start Tennis”, which was founded to promote peace through sport and provide tennis wheelchairs to war victims across the world.

Bopanna and Qureshi’s heartfelt championing of its true values are a welcome reminder in the present climate of how sport can unify and promote peace and development.