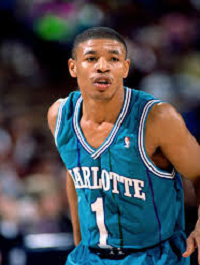 At 5ft 3in (1.6m), Tyrone "Muggsy" Bogues is no ordinary basketball player but that has not stopped him from having a successful NBA career spanning 15 seasons for four different teams. This week the Toronto Raptors, one of his former teams, played Orlando Magic at London's O2 Arena for the NBA's Global Games match and Muggsy used the opportunity to inspire the next generation of players to stay committed to their goals and challenge the barriers facing them in the ultra-competitive world of professional sport.

Speaking in an interview with the BBC this week, Muggsy said:

"I knew that a lot of folks didn't understand a guy my size playing a game that's supposed to be meant for the big guys.

"I had to break a lot of barriers down and I had to change that mindset - and the only way of doing that is by being effective on the court."

The diminutive Muggsy, who retired in 2001, started his career as a point guard for the Washington Bullets before spending 10 seasons with the Charlotte Hornets where he cemented himself as one of the most popular players in Hornets history. He also represented the U.S. national team and won gold at the 1986 FIBA World Championships.

As the shortest player in NBA history, he challenged the stereotype commonly associated with the sport and proved that if you have the talent, commitment and drive to succeed, then size really doesn't matter.

"You've got to have the skills," Muggsy told the BBC. "You've got to have a great attitude because if you don't, nobody will want to deal with you."
History may choose to remember Muggsy Bogues' height ahead of his impressive feats on a basketball court. But to those who have seen him play, or even just heard him tell his story, it will be his giant-sized will to win that stands out.