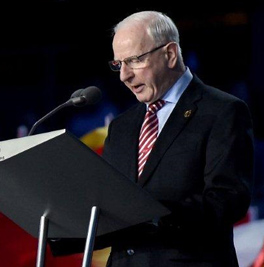 Last Sunday, European Olympic Committees (EOC) President Patrick Hickey rounded off three weeks of living in the international sports media spotlight with a gracious and humble speech at the Closing Ceremony of the inaugural European Games in Baku, Azerbaijan.

His three-minute address to the 68,000 people who had filled Baku's Olympic Stadium for the ceremony featured the personal touches which the Irishman has become renowned for in his public and media appearances. At one point he even turned to applaud the Games volunteers sitting behind him for their crucial role in the success of Baku 2015. It was an unplanned, spontaneous gesture and initiated a lengthy round of applause from the spectators.

It has been written in this column before that the qualities which distinguish the truly great communicators from the rest of the field are sincerity and the ability to articulate genuine passion: Hickey has both those qualities in abundance.

And whilst Hickey doesn't court media attention, he recognises the crucial role the media play in how a sports event is interpreted. In Baku he made a point of meeting every media request where possible – and had no qualms about answering journalists' questions when approached spontaneously.

The result was a satisfied media pack able to enliven their copy with Hickey's often colourful and strongly-stated quotes.

Some of Hickey's most ebullient quotes came from his two major speeches at the opening and closing ceremonies.

In the Opening Ceremony, Hickey declared:
"This is the proudest moment in the history of the European Olympic Committees. Here, tonight, in Baku's magnificent new National Stadium, we are witnessing – we are creating – a landmark moment in European sport."

"Sport has a unique power to effect positive change...to instil a set of values that make change inevitable: what President Bach calls a universal law of sport."
At the Closing Ceremony he said:

But Hickey's quality of communication also shone through in the one-on-one interviews he gave to journalists during the Games, including some pithy one-liners.

When talking about the athletics and swimming competitions at Baku 2015, Hickey admitted they will "not be the real deal". And he summarised the Netherlands' concept for hosting the 2019 Games as "cheap and cheerful".

Quotes such as this may not be from the PR handbook, but they perfectly illustrated the points Hickey was seeking to make clear: that the success of the inaugural European Games was not dependent on elite-level athletes in athletics and swimming attending and that the next European Games host city is under no pressure from the EOC to match Baku 2015's budget.

Hickey's generosity of time for the media in Baku allowed them to get to know him and understand his passion for sport and for introducing the European Games. In turn this led to Hickey's personality coming through in the stories and bulletins

produced by the media pack in Baku, conveying Hickey and the European Olympic Committees as the committed administrators behind bringing the European Games to life and to sustaining the Games through 2019 and 2023.