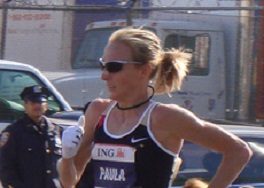 “Just get to the finish line” is most prospective marathon runners’ response when asked what their hopes are for the 26.2 miles of bone hammering they have just signed themselves up for. Sometimes this is said as a joke but, more often than not, it is the honest objective.

In the Virgin Money London Marathon this Sunday, the group of people just hoping to complete the dreaded thing has been bolstered by female marathon world record holder Paula Radcliffe.

In competing in the amateur ranks of the race – she will be running against club runners rather than with the women’s elite – Radcliffe will be highlighting what an immense challenge, and an achievement, running a marathon is.

The race will no doubt be a painful one for her personally. The years of pushing herself to her limits day after day to become one of the greatest female distance runners in history have caught up with the 41-year-old, leaving her with a reduced range of movement in her arthritic left foot.

It means that Sunday is about survival; about getting through it one last time.

Earlier this week she told the BBC: “If you were being competitive, I would’ve pulled out five weeks ago but I’ve been there so many times and this time I thought it doesn’t matter, essentially, if I run it in three hours or 2:45. It was just to see if I can get healthy and get to the start line. I’m almost there and I’m hoping my body will remember a little bit once I get running.

“There’s so many stories within the race and it will be nice to be a little part of that and share in that and create some different memories. It won’t be about trying to run the fastest race ever, it will just be me trying to do myself justice and get round.”

Making it round one more time will be a mightily impressive feat for Radcliffe. But regardless of whether she makes it all the way to the finish line, her struggle in making it to the start line once again has reminded everyone about the sacrifices running a marathon involves.

The London Marathon raises an incredible amount of money for charity every year and it peaked in 2009 with over £47.2 million given in donations.

And it’s people’s struggles in making it to the start line – as well as the good causes they are running for – which get people to put their hands in their pockets year after year.

This year will see Paula Radcliffe step down from the elite pack to compete with the everyday racers. But her struggle and story in making this transition are to the race’s great overall benefit.