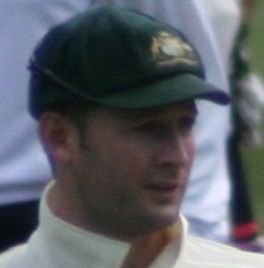 As Australia basked in the glory of winning the ICC Cricket World Cup this week, captain Michael Clarke took the opportunity to dedicate the victory to his former team-mate Phillip Hughes who tragically passed away last November after being struck by a cricket ball whilst batting in a domestic first-class match.

Sunday saw Australia seal their fifth World Cup title with a seven-wicket win against New Zealand in front of a record-setting crowd of 93,000 at the Melbourne Cricket Ground.

Australia, co-hosting with New Zealand, put on a spectacular show but the tragedy that rocked Australia and the sporting world last year undoubtedly remained a burning motivation for the team throughout the six-week tournament.

Although there was a reluctance to mention his name during the tournament – as Hughes’ family had requested to grieve away from the limelight – he was certainly at the forefront of the Australian players’ minds after their victory.

And it was Clarke, who also spoke at Hughes’ funeral, who put it best: "I think for everybody in Australian cricket it's been a really tough few months. Tonight is certainly dedicated to our little brother and our team-mate Phillip Hughes.

“We are still thinking about him. We are still talking about him and we always will. We believe we played this World Cup with 16 players in our squad and that will continue for the rest of my career, that’s for sure.”

The captain’s poignant words resonated throughout the cricketing community and the wider sporting world, giving the celebrations an appropriate perspective given the turmoil Australian cricket has undergone in the past four months.