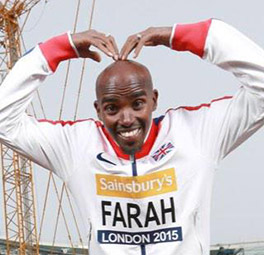 At every Olympic Games there are iconic moments which resonate with the audience and come to define how a Games is remembered.

Mo Farah winning gold in the 5,000m at London 2012 in front of a home crowd at the Olympic Stadium a week after winning the 10,000m in the same stadium was one such moment.

The sight of Farah and Usain Bolt striking each other's poses (Farah mimicking the "lightning bolt"; Bolt mimicking the "Mobot") on the podium became one of the defining images of London 2012.

So it was fitting that with the histories of Farah and the London 2012 Olympic Stadium so closely intertwined that it should be Farah who returned on Monday to where he made history to launch the July edition of the Sainsbury's Anniversary Games – a key legacy project of London 2012.

Fresh from a world-record breaking victory in the indoor two mile at the Birmingham Grand Prix two days before, Farah described his visit to the Olympic Stadium as a return "home." He spoke enthusiastically during the launch about his eagerness to "get back on this track to compete, at what will be a stunning celebration of athletics."

"The atmosphere will be amazing and I'm sure it will bring back the memories of London 2012 and the inaugural Sainsbury's Anniversary Games in 2013," he added. "I hope the British public will be as excited as I am about this event, and will come out to support the athletes."

British Athletics Chief Executive Niels de Vos certainly thinks they will and believes that the appearance of a "global superstar" like Farah at the event will help the Sainsbury's Anniversary Games to be the start of a new athletics legacy at the former Olympic Stadium. The Sainsbury's Anniversary Games will be one of many future athletics events held at the Olympic

Forever part of the stadium's legacy, Farah is clearly delighted that it will be at the heart of British athletics for at least the next half-century; not just so that he himself can return "home" but so that over the next 50 years future athletes will also have the opportunity to make the iconic stadium their own.

"This stadium's for athletes and the Olympics has left something behind," he said. "What I want to do is bring my kids here in the next 10 to 15 years and watch athletics too, as well as football."

After all it is the athletic performances of athletes like Mo Farah on home soil which are vital in inspiring the athletes of tomorrow and millions of young people across the country to engage in the sport.

For now, there are few British athletes more capable of these kinds of inspiring performances than Mo Farah, but Britain will be hoping that his legacy will create many others over the next 50 years capable of following in his footsteps in the former Olympic Stadium.