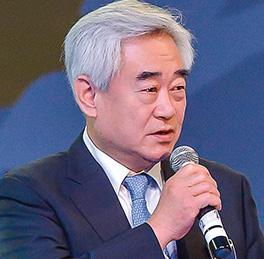 Giving every individual the possibility of practising sport is a fundamental principle of Olympism and a value strived for by international federations worldwide.

For World Taekwondo Federation (WTF) President Chungwon Chou the desire to make taekwondo as accessible to as many people around the world as possible has been a driving force of his presidency over the last 10 years.

Under his visionary leadership, taekwondo has developed into a global sport and as a sport which requires very little equipment or facilities it has been able to flourish around the world.

But President Choue had long recognised that athletes with an impairment represented a "vast pool of athletes" whose potential had not yet been realised by the WTF. He spoke passionately on numerous occasions about his dream that taekwondo would be included in the Paralympic Games in order to "provide a pathway into para-sport for people who would not otherwise have an opportunity to engage with the Paralympic Movement."

Last weekend, after six years of developing para-taekwondo, President Choue realised this dream as the IPC Governing Board announced at a meeting in Abu Dhabi that para-taekwondo would have the honour of being included in the Tokyo 2020 Paralympic Games sports programme for the very first time.

"Today is not just the realisation of a dream for us, but the realisation of a dream for para-taekwondo athletes around the world," President Choue said. "Inclusion in the Paralympic Games will help us to engage with more people than ever. We have achieved a lot but we know this is only the beginning for para-taekwondo. We are very grateful to the IPC for giving us and our athletes this opportunity and over the next five years we will work tirelessly to show them that they were right to put their faith in our sport."

Never one to rest on his laurels, President Choue announced just three days after the IPC's decision that he had invited International Taekwondo President (ITF) Ung Chang and the ITF demonstration team to the 2015 WTF World Taekwondo Championships in a further bid to unite the global taekwondo family.

"We want to work with the ITF to ensure that every athlete, regardless of their federation, nationality, race or gender all have the opportunity to compete at the Olympic Games," he said.

In his determination to collaborate with the ITF, President Choue showed once again how his commitment to making taekwondo truly accessible to all remains his number one priority.