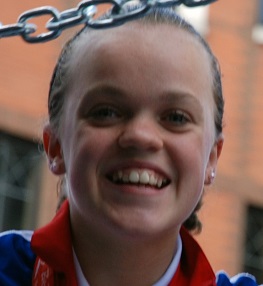 Ellie Simmonds talks of winning gold medals and breaking world records like they are her regular weekend hobbies.

Yet the familiarity with which she talks about her unbelieveable success in swimming is not alienating. On the contrary, it makes her achievements seem more accessible.

The 19-year-old Briton won three gold medals at the recent IPC Swimming European Championships in Eindhoven – to add to her four Olympic gold medals, 10 World Championship titles and her order of chivalries (MBE and OBE) – but when talking of her success she comes across as a teenager enthusing about her pastime, not an athlete talking about a world class athletic performance.

Describing her world-record performance in the 200m Individual Medley (IM) in Eindhoven, Simmonds said: "I'm just so over the moon but I've got a bad head now. I swam the fly and I hit my head on the wall as I went into backstroke, and I was like 'oh my gosh my head', but I'm so pleased."

The contrast between the impressive end product and the presentation is why Simmonds is a much-loved public figure in Britain, in turn making her one of the most in-demand sportspersons in the land. She is indisputably the most recognisable face in British swimming right now and must have, at a conservative guess, a back-log of invitations to gala events, sponsorship opportunities and endorsement proposals dating back to London 2012.

But as well as being the toast of corporates, she is - for the same reasons - an excellent ambassador for swimming, para-sport, able-bodied sport, and all young people.

Simmonds, who has dwarfism and competes in the S6 impairment category, has the capacity to tell her story in such a way as to suggest that any teenager who chooses to spend their free time dedicating themselves to their passion could achieve the same success as she has.

That is an incredibly powerful message to be able to deliver, particularly if you can do it without any pretension whatsoever.

The example given is from the same interview in Eindhoven: "I write down all my splits (times of individual strokes in an IM) and I have a little book which I keep beside my bed and I write down what I want to achieve. I had my splits for my 200 IM and I saw them before I came to the finals tonight. I know my world record splits off by heart and I went off on the fly and I looked at the board and it was 42 (seconds) and my world record split was 43, so I was like 'ooh, I'm on it' so I was just like 'swim as fast as I can!'"