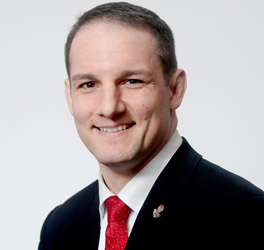 The way David Grevemberg communicates hints that he is the type of person who likes to work backwards: starting with an end and then planning out exactly how to get there.

His quote at the bottom of this article, given exclusively to JTA on Thursday, is a verbal roadmap of how the Glasgow 2014 Commonwealth Games reached its own magnificent end result, sealed with a

Closing Ceremony last Sunday evening which was typical of the fun and friendliness the Games had shown throughout.

Glasgow 2014 has been Scotland's most successful sporting event ever and the numbers make impressive reading: 1.2 million tickets sold for 17 sports across 11 days of competition; more than half a million visitors to the festival live zones; 15,000 volunteers helping hundreds of thousands of people to experience Scottish hospitality at its very best.

This level of engagement was not secured by the presence of stars like Usain Bolt, Chad le Clos and Sally Pearson, although they certainly helped. It was primarily down to Glasgow's compelling narrative, both for Scottish people and for the global sports community.

Having grown up in New Orleans, Grevemberg is about as far from being a natural Scot as it's possible to be - but he instead created the environment for Glasgow, Scotland and Scottish people to project their identity onto the world, and re-connect with it at the same time.

But for Scottish sport, the Games has gone even further and could prove to be a turning point in the fortunes of the country's national teams on the world stage.

The country is not currently – and has not been for a long time – a powerhouse in either of its two mainstream team sports: football and rugby. But 53 medals (19 gold, 15 silver and 19 bronze) and a fourth-place finish in the medals table shows that Scotland has some serious sporting talent to be proud of.

Helping to build respect and pride is how Grevemberg first established his reputation. As the International Paralympic Committee's former Executive Director of Sport and International Federation Relations, he is widely acknowledged as having been a key figure in making para-sport more credible and successful. Now he's done the same for Scottish sport. After his duties with Glasgow 2014 conclude, Grevemberg is moving on to become the Chief Executive of the Commonwealth Games Federation. But Glasgow has had its effect on Grevemberg as well – to the point that he has decided to keep his family in Scotland despite his new job being based in London. The Glasgow culture is in his blood, and his vocabulary, and it may be the case that neither Grevemberg nor Glasgow will ever be the same again.

"We're just now reflecting on 11 days of amazing sport in a city that welcomed the world with fun, joy and friendly enthusiasm.

"In delivering the Glasgow 2014 Commonwealth Games we aspired to maintain our authenticity and sincerity in all aspects of our journey, staying true to the ambitions of the people of Glasgow and Scotland, while hosting a truly world class and community relevant Games-time experience and a launchpad for legacy.

"We planned our Games with a wider consciousness, keeping true to the values of the Commonwealth Games Federation; Humanity – keeping people as our focal point; Equality – ensuring that we treated people with respect and dignity, while empowering them with calls to action and social opportunities; and Destiny – unleashing and encouraging people's aspirations and ambitions to change the world for the better.

"We hope our inspiring narratives, the boldness of our activities and our positive results will place Glasgow 2014 not only as a Games that added value to the Commonwealth Sports Movement, but also contributed to the prosperity and influence of the wider global sport community."