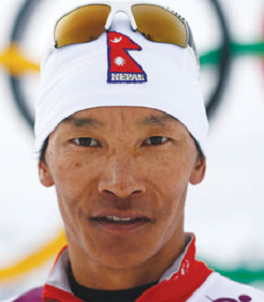 It takes a lot to stand out during a week of sport like the one we have just seen at the Sochi 2014 Olympic Winter Games.

On the ice there's been drama, defiance and heartache for Britain's Elise Christie as she suffered three disqualifications in three separate short track speed skating events.

Then there was an incredible photo finish in the quarter-finals of the men's ski cross as the final jump caused three of the four racers to crash, leaving them to slide their way across the line in what looked like a three-way dead heat to the naked eye. Added to that was the excitement (and dancing skills) of the Jamaican bobsleigh team as well as the sight of a "mad old woman" (as storied violinist Vanessa-Mae described herself) bombing down the giant slalom course to finish in a glorious last place. And we haven't even got on to the thrills of curling, which seems to be everyone's new favourite sport.

But amongst this catalogue of sporting entertainment the winners and losers of the men' s cross-country skiing 15km classic reminded everyone of what the Olympic Games are really about: those three core Olympic values of friendship, respect and excellence.

The classical discipline of cross-country skiing makes it all the more gruelling so after winner Dario Cologna, from Switzerland, finished the course in 38 minutes and 29 seconds you could have forgiven him for simply welcoming home the remainder of the top 10 before starting his recovery. But there he was to congratulate Roberto Carcelen when, almost half an hour after Cologna had finished, the Peruvian crossed the line in 87th and last place. Just completing the course was an achievement for Carcelen who had fractured a rib in training for the event. Cologna, however, was also joined in congratulating Carcelen by the man who had finished in second last place, Dachhiri Sherpa from Nepal.

Sherpa's own sacrifices to make it to his third Olympic Games at the age of 44 are impressive and include taking four months off work as a brick layer to train. Despite this, he arrived in Sochi with low expectations of where he would finish, telling Agence-France Presse: "I think there is a very big chance I will finish last."

Yet Sherpa's purpose in Sochi was not personal glory but to inspire his nation's young people.

"The placing is not important", he added, "if I can teach young people in Nepal about the Olympic spirit. This spirit is in my heart."

In their post-race exchanges, Sherpa, Cologna and Carcelen may not have been able to communicate that well between their three languages but their bear hugs and beaming smiles sent a message across the world that the Olympic values, sometimes held up as a woolly concept by the media, take on a cast-iron reality during the Games.